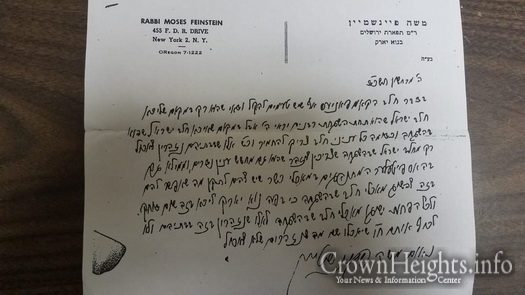 An askan in New York who would arrange kosher food for Jewish patients in local hospitals was the recipient of a letter from Reb Moshe Feinstein Zt”l regarding Cholov Akum.

The letter was regarding a hospital where he asked the staff why they served cholov akum. When they replied that they relied on the heter of HaGaon Rav Moshe Feinstein Zt”l, the askan repeated what they said to Rav Moshe Feinstein.

The letter was discovered recently and, to the best of our knowledge, was never published before.

Below is the text of the letter:

Although there are halachic reasons to allow drinking [non-Cholov-Yisrael] milk produced by companies [under government supervision], this leniency certainly only applies in places where one cannot obtain Cholov Yisrael milk, supervised by G-d-fearing rabbonim. However, in places where such milk is available, one must be strict and only drink supervised milk. The same applies to other dairy products.

It is especially important to be careful about this if one is accustomed to only consume supervised dairy products at home. In such a case [drinking milk which is not real Cholov Yisrael] involves the concern of violating a neder [vow].

Therefore, hospitals that provide kosher food should do whatever they can to obtain dairy products under rabbinic supervision, for here in New York there is no difficulty involved in doing so. At the very least, they should obtain supervised dairy products for those patients who only eat cholov Yisrael at home, and they should not force them, chas veshalom, to eat what they are careful not to eat.