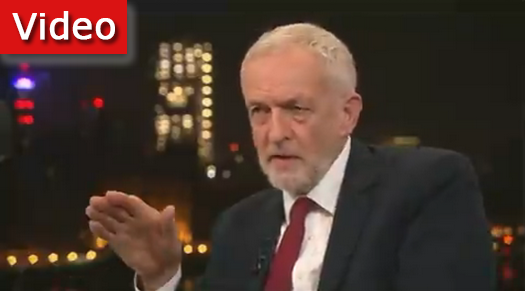 British Labour leader Jeremy Corbyn declined on Tuesday to apologize to the local Jewish community over the anti-Semitism in his party and the way it is handled.

In a BBC interview, the Labour leader was asked four times whether he would like to apologize over the party’s failure to clamp down on the anti-Semitism within the party.

“What I’ll say is this: I am determined that our society is safe for people of all faiths,” Corbyn replied.

“I don’t want anyone to be feeling insecure in our society and our government will protect every community against the abuse they receive,” he added.

Corbyn said racism “is a total poison”, adding: “I want to work with every community, to make sure it’s eliminated. That is what my whole life has been about.”

The interview followed an article by the Chief Rabbi of Britain, Rabbi Ephraim Mirvis, in which he criticized Corbyn and the party’s “utterly inadequate” response to anti-Semitism within its ranks.

“The claims by leadership figures in the Labour Party that it is ‘doing everything’ it reasonably can to tackle the scourge of anti-Jewish racism and that it has ‘investigated every single case’ are a mendacious fiction,” wrote Rabbi Mirvis in the op-ed which appeared in Tuesday’s edition of the Times.

“We sit powerless, watching with incredulity as supporters of the Labour leadership have hounded parliamentarians, party members and even staff out of the party for facing down anti-Jewish racism,” he added.

“Even as they received unspeakable threats against themselves and their families, the response of the Labour Leadership was utterly inadequate,” the rabbi continued, also saying that a “new poison – sanctioned from the very top – has taken root in the Labour Party.”

Challenged about the rabbi’s comment in Tuesday’s interview, Corbyn said, “No, he’s not right. Because he would have to produce the evidence to say that’s mendacious.”

The Labour leader said he was “looking forward to having a discussion with him because I want to hear why he would say such a thing”.

Corbyn also insisted he had “developed a much stronger process” for dealing with allegations and had sanctioned and removed members who were judged to have made anti-Semitic statements.

He added that anti-Semitism allegations “didn’t rise after I became leader”.

“Anti-Semitism is there in society, there are a very, very small number of people in the Labour Party that have been sanctioned as a result about their anti-Semitic behavior,” said Corbyn.

Dozens of Labour members have been suspended over their anti-Semitic statements in recent years, and the party has been criticized for its failure to deal with the anti-Semitism within it.

Corbyn, who took control of the Labour Party in 2015, has faced ongoing accusations of anti-Semitism, both over his history of hostility towards Israel and support for anti-Israel terrorist groups, as well as the rise in anti-Jewish rhetoric within the party.

A 2018 poll found that nearly 86% of British Jews believe the Labour leader is anti-Semitic, compared to just 8.3% who believe he is not.

A poll conducted for The Jewish Chronicle last month found that just 7% of British Jews would even consider voting for Labour in this December’s general election.

Holocaust denial and conspiratorial antisemitism have no place in society, let alone the Labour Party