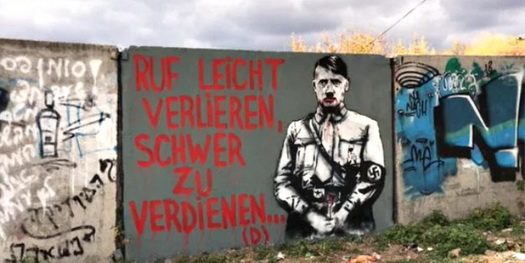 A massive portrait of Adolf Hitler, along with writing that praised the Nazi leader, was found painted on a wall near the grave of famed Rabbi Nahman of Breslov in Ukraine on Saturday.

The graffiti was found shortly after thousands of Breslov Chasidim made a pilgrimage to Rabbi Nahman’s grave on the holiday of Rosh Hashana.

According to Ukrainian news website Interfax, Israeli Ambassador to the Ukraine Yoel Lion posted a picture of the graffiti on his Twitter page and said, “Never Again begins by fighting any kind of antisemitism.”

“Ukraine should strongly condemn and bring the perpetrators to justice,” he added.

The ambassador later posted another message praising the authorities’ quick response to the incident, including the swift removal of the graffiti.