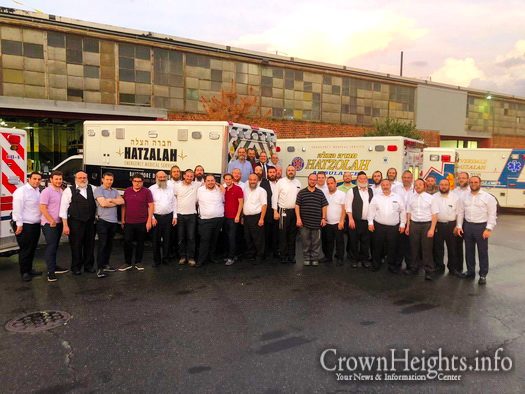 A Hatzalah volunteer, on the front lines keeping our communities safe, penned the following letter to his fellow volunteers after facing the multitude of recent tragedies that have struck Klal Yisroel:

We have all been so hurt by the mi-bamayim tragedies that have hit Klal Yisrael recently, that I thought I’d should share this story.

Imagine this: a dispatcher taking the lines and expecting a test call, instead picking up to hear a women, screaming frantically on the phone “hurry, a child drowning at (insert address here)”. This is one of every dispatchers worst nightmares (in this case, I was the dispatcher). I put the call out, activated city medics (NJ doesn’t do HVAC medics [except Lakewood]), and then handed off the lines so that I could go direct to the scene. Just before getting the medics sent though, my heart sank even further as one of my guys called in and said “h-base, confirmed arrest”. I was now preparing myself for the worst while hoping for the best.

When I arrived on scene, what I saw was all of my guys working together k’ish echad b’leiv echad, on a 3 year old boy who just moments ago was lifeless, but has now just started to cry. B”H!

After 3 days in the PICU (Pediatric Intensive Care Unit), the child was discharged. A BLS (Basic Life Support, [CPR]) SAVE!

I am tremendously proud of my guys. Many of them have had no exposure to this type of call; yet they each kept their cool, and followed the directions of the senior member who was first on scene in under 1-minute.

The child had been found at the bottom of the pool, and was under for an undetermined amount of time. CPR was started by the father, and continued by us until ROSC (Return of Pulses).

We have a Women’s Mitzvah Chat in our town, and the mother had this to post:
———-
I would also like to thank this amazing community for all the love and support given to our family. B”H for this chat and community for all the tefillos pouring out to Hashem and that Hashem answered us in such a positive way.
I would also like to bring to everyone’s attention how unbelievable our Hatzolah Team was and is. I found out that 911 was called at the same time Hatzalah was called. Hatzolah was at our home and had worked on Chaim and had him in the ambulance and on the way to the hospital prior to the police and the other ambulances even showing up. The Police wanted to know where Chaim was, and when I told him on the way to RWJ, they wanted to know who took him. When I said he was in the ambulance, the officer said no way the ambulance was on the way, and I said we used Hatzolah. They didn’t want to believe me at first. The Hatzolah team was sooooo professional, acted with such respect, compassion and dignity and words can’t describe how appreciative we are for their quick response. Had we waited for 911 I don’t think, Chas V’Shalom, our outcome would have been so successful. I hope and pray no one should ever need them but if Chas V’Shalom you do please call Hatzolah first. We had the Hatzolah number in our phone contact, but Leora, Chaim’s sister, has now gone to all of our family members with phones and put the Hatzolah sticker on the back so it will always be at our fingertips.
Again thank you to all on this chat and community and thank you Hatzolah.
Tizku L’mitzvos
———

We are all a team. ONE organization, ONE goal, and most importantly, ONE PEOPLE.

A kesiva v’chasima tova to us all, and may we all continue to be shluchim for tov.

For stickers with the number to Hatzalah: Click Here