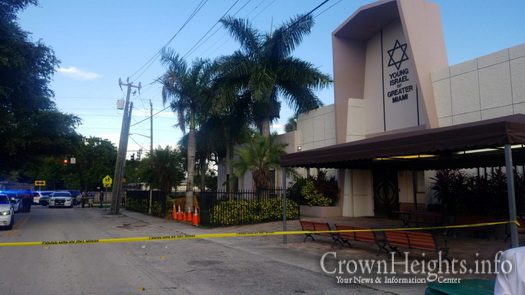 Police have arrested a suspect in the shooting of a 68-year-old man outside a North Miami Beach synagogue last month, The Associated Press reported on Wednesday.

Prosecutors are investigating to determine whether hate crime charges are warranted in the shooting, according to the report.

Miami-Dade police arrested Carlints St. Louis, 30, on Tuesday, a day after he reported his gun stolen from a car spotted outside the synagogue.

He has been charged with attempted felony murder, discharging a weapon from a car and aggravated battery on a person over 65. Authorities have not described a motive.

“Acts of violence will not be tolerated in our community, particularly in sacred places of worship,” Miami-Dade State Attorney Katherine Fernandez Rundle said in a statement on Wednesday. She said the chief of her hate crimes unit is on the case.

“I am committed to filing the appropriate charges based on the evidence we uncover, and to vigorously prosecute this case to the fullest extent of the law,” she said.

The victim, Yosef Lifshutz, is recovering from surgeries after the July 28 shooting, synagogue officials said. Investigators said he was shot multiple times in the legs while waiting for the Mincha afternoon prayer service outside the Young Israel of Greater Miami synagogue.

Police used surveillance video in the area to get a description of the car involved. Investigators said it shows that a shooter drove up in a black Chevrolet Impala, got out and “assumed a shooting stance while pointing a firearm at the victim,” according to a Miami-Dade police report.

The arrest report says St. Louis filed a police report on Monday saying a 9 mm gun had been stolen from his Impala. Officers then found a loaded magazine from a semi-automatic firearm in the Impala, and the rounds matched the casings at the synagogue, the report says.

Cell phone towers recorded St. Louis in the area of the synagogue on July 28, police said, and his car was spotted in the area on a license plate reader that day. Investigators also said he matches the physical description of the shooter.