« Leibel Mochkin, 95, Daring Chassidic Activist in the USSR and Beyond
Chof Av Commemorated in Sydney Australia » 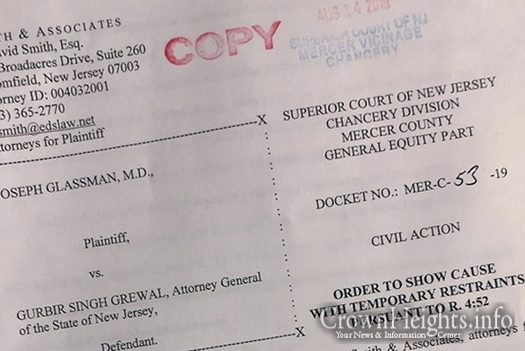 New Jersey’s right-to-die law just went into effect earlier this month but now a judge has halted it after a Bergen County doctor opposed it.

Advocates have been fighting for the right to die for terminally ill patients for years. On Aug. 1, the “New Jersey Medical Aid In Dying Act” went into effect saying you must
have six months or less to live and be diagnosed by two medical doctors. The patient must also sign a written declaration witnessed by two people that they’re acting voluntarily and must take the medication, themselves.

Though there are those for this law, there are many against it, including Dr. Yosef Glassman of Bergen County.

“He feels it opposes his rights as a doctor, his obligations as a doctor to heal and his religious viewpoints, which is that he does not want to participate in an assisted suicide,” said E. David Smith, Dr. Glassman’s attorney.

Judge Paul Innes of Superior Court in Mercer County sided with Dr. Glassman and has issued a temporary restraining order on the law. Though not required to participate, doctors are required to refer patients to another doctor, which Smith said his client did not want to do.

« Leibel Mochkin, 95, Daring Chassidic Activist in the USSR and Beyond
Chof Av Commemorated in Sydney Australia »