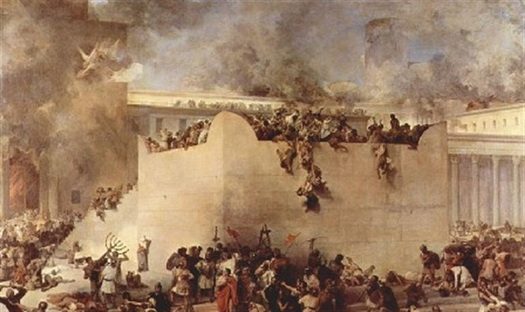 The discovery of a tiny fragment of a gold and silver piece of jewelry on Mount Zion in Jerusalem, announced on Saturday night by the Mount Zion Archaeological Project, is evidence of the Babylonian conquest of Jerusalem, according to researchers.

The Babylonians, under the reign of King Nebuchadnezzar, besieged Jerusalem and then conquered the city, razing it – including Solomon’s Temple – and burning it to the ground. The researchers discovered further evidence of the Babylonian destruction in ash layers on Mount Zion. The ash layers were confirmed to belong to the era of the Babylonia conquest through the specific artifacts and materials found which are unique to that period, such as Scythian arrowheads and pottery fragments.

“For archaeologists, an ashen layer can mean a number of different things,” said Shimon Gibson, a UNC Charlotte professor of history and co-director of the project. “It could be ashy deposits removed from ovens; or it could be localized burning of garbage. However, in this case, the combination of an ashy layer full of artifacts, mixed with arrowheads, and a very special ornament indicates some kind of devastation and destruction. Nobody abandons golden jewelry and nobody has arrowheads in their domestic refuse.”

“The arrowheads are known as ‘Scythian arrowheads’ and have been found at other archaeological conflict sites from the 7th and 6th centuries BCE. They are known at sites outside of Israel as well. They were fairly commonplace in this period and are known to be used by the Babylonian warriors. Together, this evidence points to the historical conquest of the city by Babylon because the only major destruction we have in Jerusalem for this period is the conquest of 587/586 BCE.”

“It’s the kind of jumble that you would expect to find in a ruined household following a raid or battle,” Gibson said. “Household objects, lamps, broken bits from pottery which had been overturned and shattered… and arrowheads and a piece of jewelry which might have been lost and buried in the destruction.”

“Frankly, jewelry is a rare find at conflict sites, because this is exactly the sort of thing that attackers will loot and later melt down.”

“I like to think that we are excavating inside one of the ‘Great Man’s houses’ mentioned in the second book of Kings 25:9. This spot would have been at an ideal location, situated as it is close to the western summit of the city with a good view overlooking Solomon’s Temple and Mount Moriah to the north-east.”

The fragment of jewelry is part of a tassel or an earring with a bell-shaped gold upper part and a silver part underneath in the shape of a cluster of grapes. According to Gibson, it “is a unique find and it is a clear indication of the wealth of the inhabitants of the city at the time of the siege.”

Rafi Lewis, a senior lecturer at Ashkelon Academic College and a fellow of Haifa University and co-director of the project told Haaretz about the jewelry fragment, “It went through trauma itself, was smashed somehow. The little silver cluster of grapes is almost detached from its golden case, as if the jewel had been violently torn from somebody. You can almost sense the violence on the artifact itself.”

“No evidence of this kind of richness of material culture has ever been found inside the walls of Jerusalem before,” Lewis adds. “The biblical books of Kings and Daniel dwell on the wealth of Jerusalem that Nebuchadnezzar took back to Babylon, and describe feasting using the gold vessels and copper vessels which came from the city. This small artifact that shows the potential of how rich Jerusalem really was.”