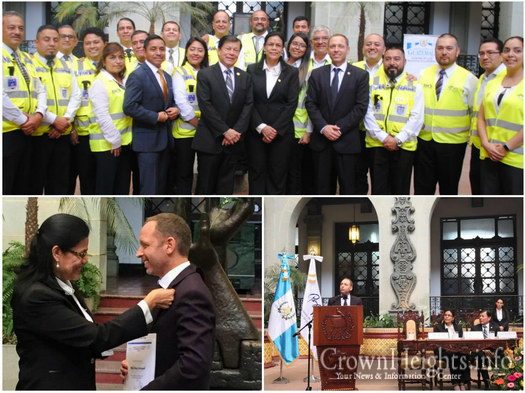 Israeli-born Guatemala-based ZAKA volunteer Shay Salamon has been awarded the “Ambassador of Peace” honor in a moving ceremony recently held in the National Palace of Culture in Guatemala.

Salmon assists in ongoing emergency preparedness training of two ZAKA units in Guatemala. This, after the units proved their worth in the aftermath of the devastating June 2018 volcano disaster, treating dozens of casualties and fatalities. In addition, Salamon has been involved, together with the ZAKA Guatemala volunteers, in caring for the survivors and homeless from the disaster, and helping build the new neighborhood known as “New Jerusalem”.

At the ceremony, Guatemala’s Secretary of Peace, Dr. Lourdes Xitumul Piox, said this award was given in respect of the humanitarian assistance and care provided for the nation’s citizens by the ZAKA volunteers. She added: “We hope that the activities of Mr. Salamon and the ZAKA volunteers will help the country, as they are trained and prepared for disaster situations.”

Dr. Lourdes Xitumul Piox conveyed to Salamon the gratitude of Guatemala President Mr. Jimmy Morales and Vice President Mr. Jafeth Cabrera, emphasizing that the friendship between the two countries would continue to flourish.

In expressing his gratitude for the honor, Salamon noted how moved he was by the award, while understanding the weight of the accompanying responsibility – a commitment he was willing to bear.

ZAKA Chairman Yehuda Meshi-Zahav: “The ZAKA volunteer organization has now trained and equipped 48 units around the world in emergency preparedness. ZAKA Guatemala is a unique unit, under the direction of ZAKA Guatemala commander Rabbi Yosef Garmon who initiated the idea of establishing ZAKA units in a Latin American country. Since completing their training, they have been engaged in round-the-clock activities, helping others with professionalism and dedication, it is a great sanctification of God’s name to see Jews and non-Jews working together for one another.”