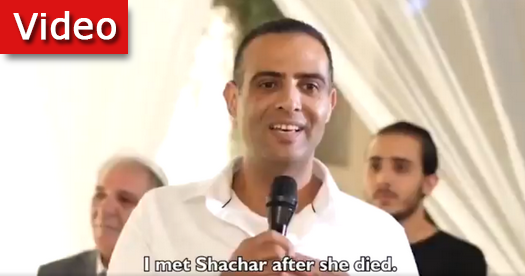 As a Jewish couple stood under the chuppah this week, an Arab Israeli took the microphone to account an amazing story to the assembled guests. He began his story with a shocking statement, ‘I met Shachar [the bride] after she died.’

Ten years prior to the wedding, Shachar was involved in a serious car accident. The Arab paramedic explained that when he arrived at the scene, a doctor, who had arrived there two minutes before him told him. “‘Don’t bother touching the girl. In my opinion, she’s already dead. Let’s treat the driver.’ I told him, ‘Fine. You treat the driver’ and I proceeded to try to revive Shachar.”

The paramedic recounted how Shachar was in cardiac arrest and according to the protocol, the doctor was right and her death should have been declared. “But something from above told me that I need to fight for her.” As the paramedic explained how he performed CPR on Shachar for 40 minutes as she lay in the car, the wedding guests burst into applause.

“The police already announced on the radio that one person had died in a car accident. Shachar’s parents heard the bitter news on their way from the north. We continued CPR on the way to the hospital and at the entrance to the hospital, Shachar’s heart began to beat.”

“When I returned home that night, I had no hope. As I lay my head on the pillow, I thought for a moment that the Angel of Death may have beat me but I knew that even if he beat me, I did everything that I could [to save Shachar]. At the end [the Angel of Death] didn’t win over me. I must have done what was necessary because Shachar is here with us.”

The paramedic continued by saying that he wanted to thank Shachar although usually the people he saves thank him. Turning to Shachar, he said, ‘I want to thank you and I’ll tell you why. People always ask me how I continue with my work when I see so much death all the time. The answer is here – Shachar, I continue due to you. I saved your body but you saved my soul. Every time I think [of difficult] incidents I’ve been involved in, I remember you and your smile. Thank you. Mazel Tov. I love you both.”

Amazing! #Muslim medic speaking at #Jewish Chuppah about how he saved the bride in 2009! A must watch! pic.twitter.com/lOT1Wrcd6t