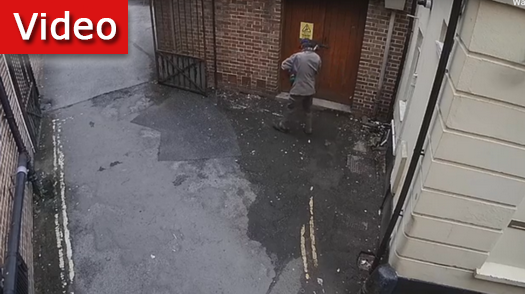 Tried to Set Fire to a Synagogue – Burned Himself Instead

Tristan Morgan, a radical right-wing activist with extreme anti-Semitic views, was recorded on security cameras trying to set a synagogue on fire in Exeter, England on July 21, 2018, shortly before the Tisha B’Av fast.

The cameras showed Morgan, now 52, breaking the window of the synagogue with a small axe and then trying to spill flammable liquids to set the synagogue on fire. Instead, the fire set alight his clothing and he fled the scene engulfed in flames which whipped his hat off his head and set his hair on fire. The flames went out after a few seconds and Morgan suffered only minor burns.

On Friday, a British court sent Morgan to an enforced hospitalization in a London psychiatric hospital for an indefinite amount of time. The order was based on the opinions of psychiatrists who said that Morgan “suffered a psychotic attack during the attack on the synagogue.”

One of the prosecutors in the trial described Morgan as having “deep anti-Semitic beliefs,” and said that Morgan admitted to the arson. He added that Morgan owns a book on white supremacy and has encouraged terrorism on the web by uploading a song entitled The White Man.

“The footage presented to the court showed Morgan’s level of planning, determination and intention,” Exeter police chief Matt Lawler said. “The evidence clearly showed that he held extreme right-wing, anti-Semitic and white supremacist views. Morgan is clearly very ill, and after a comprehensive medical inquiry it is clear that a forced hospitalization order is the most appropriate step.”