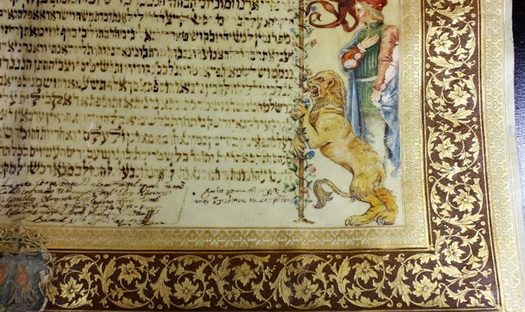 A magnificent ketubah, written over 300 years ago in Florence, Italy, has been exciting Jewish collectors and the Jewish community in Italy over the last few days. The ketubah is dated 14 Nissan, 5462, which is Passover eve – surprisingly when the wedding ceremony took place in Florence.

Rabbi of Rome and Vice President of the Conference of European Rabbis, Rabbi Shmuel Di Segni, relates that he was surprised when he initially heard that weddings in Rome were generally concentrated to the day before Passover. “For a few years now I’ve been researching this phenomenon, whereas Jewish communities in Rome would customarily conduct a large number of weddings and related festivities specifically on the eve of Passover. Until now, I thought this was only in Rome, but now I see that in Florence and Urbino wedding ceremonies were also conducted on the evening before Passover.”

Rabbi Di Segni adds that according to his research, the reasons for this were “because this is the last day before sefirat ha’omer, when it becomes halachically prohibited to conduct wedding ceremonies. Also, the poverty at the time prompted them to conduct as many weddings as possible so that they could utilize the chametz in their possessions before they needed to burn it.” He adds, “I am guessing that these wedding ceremonies were held in the evening; meaning, on the night of bedikat chametz and not on the actual fourteenth.”

The exceptionally magnificent ketubah, which was accidentally discovered in the archives of a Jewish organization in Florence, is both large and impressive, and written on parchment. The organization transferred it to the King David Auction House, where it will be offered for auction within a few days for a starting price of $20,000. The Auction House estimates that it will sell for about $40,000-50,000.

The ketubah, dated 14 Nissan 5462 (April 12, 1702), is decorated with colorful embellishments, many of them gold, and adorned with beautiful illustrations of a bride and groom wearing festive Italian clothing as well as graceful horses and lions. The groom’s name is “Shlomo Menachem, son of…Shmuel Meir of Urbino,” and in keeping with Jewish tradition, the witnesses’ signatures were added to the bottom of the beautiful document.