« Tensions Heighten As US Sends Additional 1,000 Troops to the Middle East
Alternate Side Parking Sign Mistake Corrected in Crown Heights » 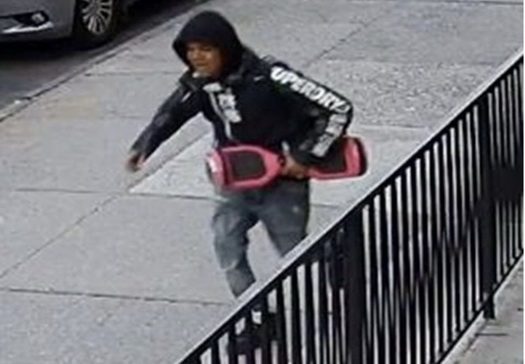 Local residents in Williamsburg are furious about what they are calling an “NYPD coverup”, and demanding action.

Two months ago, on April 3, two Hasidic children were riding their electric hoverboard and a scooter on Marcy Avenue, when suddenly two teens ran up to them from behind. One of the teens punched the 10-year-old Hasidic victim in the face pushing him off his segway. The suspect picked up the segway, and along with another friend, runs away.

The NYPD responded, and an investigation was done.

So why is YWN publishing this nearly two months later?

Because local residents have provided the video to YWN of the brutal assault, which strangely, the NYPD decided not to disseminate to the media and on their social media accounts.

Instead, the NYPD tweeted a image of the robbery suspect running away, never mentioning that this was a vicious assault of a young child – not to mention possibly a hate crime as well. If this shocking video would have been released by the NYPD, there is a very good chance that he would have been identified by someone and turned over to the police for an arrest.

YWN will let our readers see the video below, followed by the NYPD tweet.

SHOCKING VIDEO: On April 3, two jewish boys were punched in their head and robbed of their scooter Marcy Ave x Keap St, @NYPD90Pct @WspuShomrim still looking for the suspects. pic.twitter.com/FdtAZYKBgJ

Help us identify this individual who is #Wanted for a Robbery that occurred on April 3, 2019 at approximately 7:10PM in front of 242 Marcy Ave in #Williamsburg. Any info contact #800577TIPS. #NYC #NYPD pic.twitter.com/8JmrBIK53k

« Tensions Heighten As US Sends Additional 1,000 Troops to the Middle East
Alternate Side Parking Sign Mistake Corrected in Crown Heights »