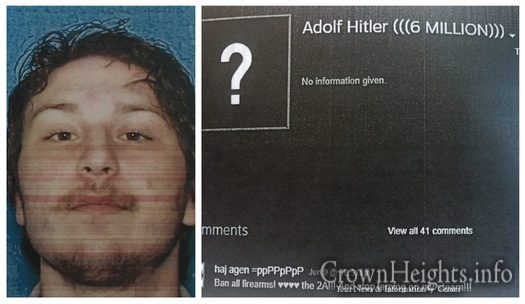 A Bay Area man who allegedly talked online about wanting to emulate the Poway synagogue shooter “except with a Nazi uniform on” is in county jail and facing three felony charges, after an investigation by the FBI and Concord police.

Concord resident Ross Anthony Farca, 23, was charged this week with making criminal threats, as well as manufacturing and possessing an assault weapon. The charges stem from comments Farca allegedly posted to his account on Steam, a popular video game platform.

Farca’s screen name was “Adolf Hitler (((6 Million))),” a reference to the number of Jewish people killed during the Holocaust. In posts to his Steam account, Farca allegedly expressed a desire to massacre Jewish people, livestream it to the internet, and then murder as many police officers as he could before they killed or captured him.

“I would probably get a body count of like 30 (Jews) and then like five police officers because I would also decide to fight to the death,” Farca said in one post, using a derogatory term to refer to Jewish people, according to court records. In other posts, he allegedly discussed picking a “better target than some random synagogue,” and referred to Jews as “subhumans.”