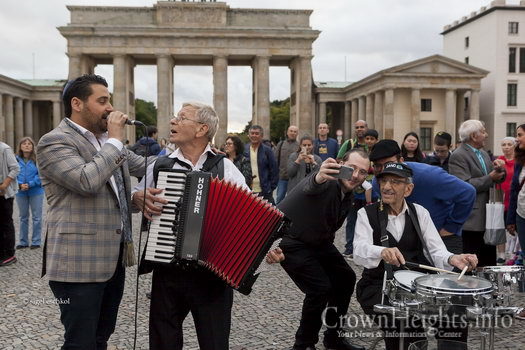 Speaking to journalists at the launch of the “Stop Antisemitismus” website, Felix Klein — the federal commissioner appointed in May 2018 to deal with rising antisemitism in Germany — emphasized that “the state cannot do everything,” urging “the courage of civil society” to join the fight.

Conceived by Sarah Levy, a freelance journalist based in Hamburg, the website offers 35 authentic examples of antisemitism encountered in the workplace, at school, in the street and in other social settings, together with suggestions as to how to respond.

The examples on the website cover the full spectrum of modern antisemitism, including Jewish facial stereotypes, conspiracy theories about Jewish bankers controlling the world and the contention that Jews exploit the Holocaust for sympathy while the State of Israel carries out atrocities against the Palestinians.

One of the quotes, from an immigrant Palestinian high school student, was used to demonstrate the connection between prejudice against Jews and opposition to Israel’s existence.

“I hate the Jews, they are not like us,” the student was quoted as saying. “They stole our land. Because of them, my parents no longer have a home.”

In the suggested response beneath, the site’s writers presented the word “hate” as a term of violence, pointed to the racism underlying the notion of “not like us,” and pushed back against the allegation that Israel is an illegitimate or racist undertaking.

“Denying Israel’s right to exist is antisemitic,” the site argued. “Yes, there were evictions of Palestinians — after a war started by the Arab countries. Others left their homeland because they were asked to do so by Arab leaders.”

The site also highlighted the “850,000 Jews expelled from Arab countries and Iran [after the creation of Israel] in 1948.”

At Thursday’s launch of the site — timed to coincide with the commemoration day for Anne Frank, the young Dutch Jewish diarist murdered in the Nazi concentration camp of Bergen-Belsen — Klein praised “the great ensemble of actors” who assembled the content, including both national representative bodies of the Jewish and Muslim communities in Germany.