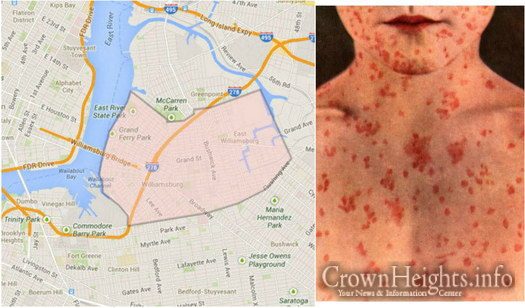 The NYC Health Department announced Tuesday that it has closed another school in Williamsburg for failing to comply with an Order of the Health Commissioner in response to the current measles outbreak. Central UTA Boys Division (762 Wythe Avenue, Williamsburg, NY 11249) was closed for failing to exclude staff and students who did not have documentation of immunity.

“School staff, parents, and health care providers need to continue playing their role in bringing this outbreak to an end” said Health Commissioner Dr. Oxiris Barbot. “We’ve seen our weekly case counts decline, but the reality is, this outbreak is not over, and the Health Department will continue to use all the resources and strategies available to us. We urge anyone who can get vaccinated to do so.”

To date, 588 cases of measles have been confirmed in New York City since the beginning of the outbreak last October. [Over 1000 cases confirmed nationwide, the highest count in 27 years.] 437 cases (74%) have occurred in the predominately Orthodox-Jewish communities in Williamsburg (ZIP codes 11205, 11206, 11211, 11249), which has been under an Emergency Order issued April 9 requiring those who live or work in these ZIP codes to have been vaccinated with the measles-mumps-rubella vaccine (MMR). A small number of cases have occurred outside of these neighborhoods but have, to date, not resulted in sustained transmission of measles.