« Monument Dedicated to Holocaust Heros at the Jewish Museum of Moscow
Derher: A New Whatsapp Series » 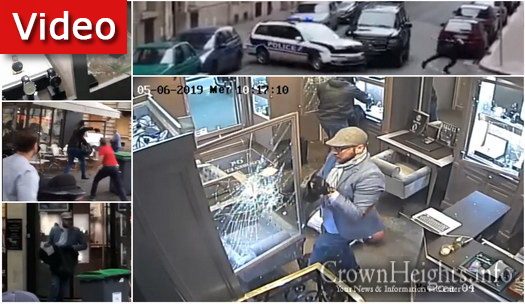 A violent Jewelry heist on a Jewish a Jewish store in Paris was caught on camera Wednesday morning. The entire event, from the entrance to the thieves being caught was documented by surveillance camera and bystanders.

The owner, Gil Shmuel Hadad, had opened the door for what appeared to be a regular customer, but whom pulled a gun on him as soon as the door was opened.

A second man forced his way in side, and threw Gil to the floor, kicking and injuring him.

The two then smashed the glass cases and gathered their loot.

As the two were busy, a man noticed the situation and dialed an emergency number. Meanwhile, cell phones videos began to be turned on, and a crowd gathered.

Oblivious, the two thieves exited the store to make their escape, and were greeted by a crowd of angry civilians. One man began attacking the two with a stick, while many others began chasing them on foot and by bike.

« Monument Dedicated to Holocaust Heros at the Jewish Museum of Moscow
Derher: A New Whatsapp Series »