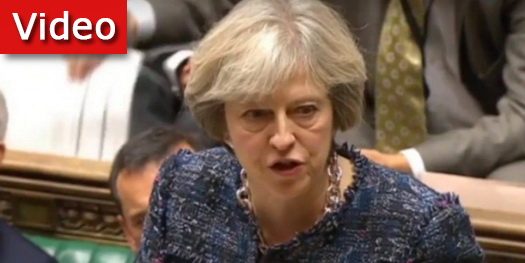 British Prime Minister Theresa May delivered an emotional and unequivocal broadside against antisemitism in her country during a House of Commons appearance on Wednesday.

May’s statement came in response to a question from John Mann, a Labour MP who has been outspoken on the issue of antisemitism in his own party and British society at large.

“For almost 400 years, this country almost uniquely in the world has been a place of safety and security and a place where Jewish communities have thrived,” Mann said during a Prime Minister’s Questions Time session.

“Does the prime minister agree with me that 2019 has to be a year when we all stand up and be counted to ensure that those young Jewish people believe, and stay in this country, wishing to contribute and no longer fearing for their future?” he asked.

Visibly moved, May added, “There’s no place for racial hatred in our society, it’s important that we all take every step to tackle it. … It is absolutely right when the honorable gentleman talks about the need for us all, every one of us, to stand up now, to stand up as we go into the new year, and say 2019 will be the year when we stand up and say there is no place for antisemitism or racial hatred in our society.”

Watch the full exchange below:

WATCH – @JohnMannMP with an important question to the PM during #PMQ‘s just now speaking of the fears many have for the future of this Jewish community in the UK!

A strong response from the PM, 2019 is indeed the year we must all work to eradicate the scourge of antisemitism pic.twitter.com/u0cwrlc5TX