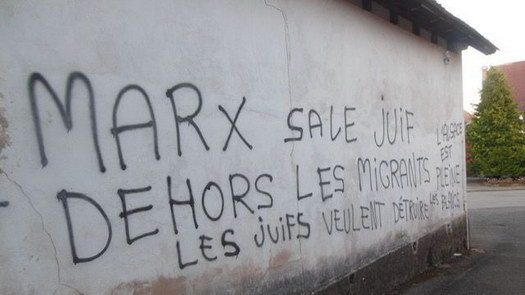 The home of a Jewish mayor in France was covered with anti-Semitic graffiti including swastikas and anti-Semitic slogans.

The home of Etienne Wolf, the Jewish mayor of Brumath in France was covered with anti-Semitic graffiti on Friday.

The Graffiti, which included swastikas and “Mayor Marx = Jude,” a reference to the communist ideologue, was painted on the side of his house and discovered that morning. Another phrase “Dirty Jew, get out” was painted as well, while another tag read: “Jews want to destroy Whites.”

Similar graffiti was found in towns nearby, as well as on many public buildings.