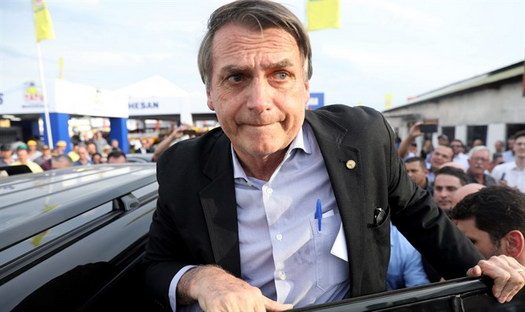 With more than 90% of the vote counted, Bolsonaro – who has been dubbed “the Brazilian Donald Trump – had won 56% of the votes against 44% for his rival, Fernando Haddad from the left-wing Workers Party.

Bolsonaro, a staunch social conservative who ran on a law-and-order platform amid a massive spike in violent crime, won the first round of the presidential election on October 7 with 46% of the vote to Haddad’s 29%.

In the legislative elections, Bolsonaro’s SLP won 52 seats in the lower chamber of the Brazilian congress, a 44-seat increase, while the Workers’ Party fell from 69 seats to 56.

A former captain in the Brazilian army, Bolsonaro drew international attention after he compared himself to US President Donald Trump and declared himself “an admirer” of the American president.

Like Trump, Bolsonaro has vowed to relocate his nation’s embassy in Israel from Tel Aviv to Jerusalem.

Bolsonaro also called for the closure of the Palestinian Authority embassy in the Brazilian capital, Brasilia.

“Is Palestine a country? Palestine is not a country, so there should be no embassy here,” he said, adding, “You don’t not negotiate with terrorists.”

A month before the first round of the election, Bolsonaro was stabbed during a campaign rally in the city of Juiz de Fora in the south-eastern state of Minas Gerais.