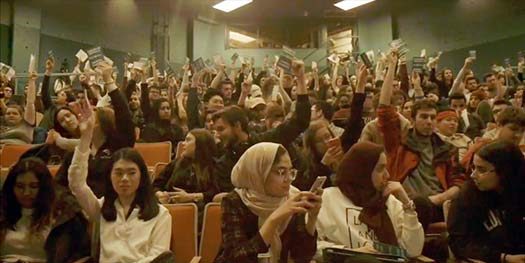 A motion supportive of the boycott, divestment, and sanctions (BDS) campaign against Israel was voted down at the University of Ottawa on Tuesday, marking the tenth successive failure for the movement on Canadian campuses. Initially the motion was erroneously announced as passed, only to be corrected ten minutes later, leading Shliach Rabbi Chaim Boyarsky to break out in dance with fellow Jewish students.

A motion supportive of the boycott, divestment, and sanctions (BDS) campaign against Israel was voted down at the University of Ottawa on Tuesday, marking the tenth successive failure for the movement on Canadian campuses.

The measure called on the Student Federation of the University of Ottawa (SFUO) to endorse BDS and “take a Pro-Palestine stance,” and to express these positions in its policy manual.

It further sought to commit SFUO to reading a declaration in support of divestment at all meetings with the university’s Board of Governors, to “work for the cancellation of all forms of cooperation with Israeli academic institutions,” and to urge a “boycott of propaganda initiatives that promote Israel or whitewash its violations of international law.”

The chair of the SFUO General Assembly meeting where the motion was debated initially announced that “the resolution is adopted” with 241 votes in favor and 231 votes against — news that was met with whoops and shouts by some students, and the display of a large Palestinian flag. However, an unidentified member of the audience pointed out shortly afterwards that any changes to SFSU bylaws or policies need to be approved by a two-thirds majority. The record was subsequently corrected to indicate that the BDS resolution failed.

Rabbi Chaim Boyarsky, co-director of the Rohr Chabad Student Network of Ottawa, said some Jewish students started crying when they heard that the BDS motion passed — only to celebrate after the correction was issued some ten minutes later.

“When that happened, Jewish students — students who never wear kippahs, never visibly identify as Jews — danced and danced in the middle of campus,” he told The Algemeiner. “It was a sight I’ve never seen before, it was unbelievable.”

Chabad partnered with other Zionist groups — including Hillel Ottawa, Hasbara Fellowships Canada, the Canadian Jewish Political Affairs Committee, and StandWithUs Canada — to help mobilize the community against the vote.

“We reached out to many, many students that came to our events,” Boyarsky said. “We called, we texted, we asked them to bring out other friends. We knew the Jewish vote alone, we can’t win. We were working around the clock to get students to come.”

Some 500 people ultimately attended the forum, including about 200 Jewish students — and the ensuing debate was marked by impassioned arguments from both camps.

Shaad Khiladi, a student who identified herself as the granddaughter of Palestinian refugees, told the audience that May 15th — the date that the nascent state of Israel was invaded by the armies of Iraq, Egypt, Jordan, and Syria in 1948 — would mark “the 70th anniversary of militarized occupation of our land” and the “perpetuation of this injustice through the incarceration of children, through the continued bombing campaigns on Gaza, the existence of an open-air prison, the existence of a 700 kilometer wall.”

She said BDS provided Palestinians “with an opportunity to gain back the voice of justice through nonviolent methods, because at this point in time, that’s all that is left for Palestinian people.”

Navine Ahmed, a uOttawa student whose message was read in her absence by her sister, challenged this characterization.

“I am from Iraqi Kurdistan,” she said, “and as a child, my family and I had to flee Iraq and claim refugee status in Syria. I’ve been a refugee, I know the complexities of this issue and the emotional toll.”

“When I visited Israel and the West Bank last year, I did the exactly the opposite of what the BDS calls for people to do,” Ahmed continued. “I talked to Israeli academics, journalists and politicians, I talked to Palestinian peace negotiators and visited an Arab village.”

“The picture of Israel and the occupied territories is not the black and white one painted by BDS,” she argued. “BDS excludes one side of the conflict from dialogue. The movement fails to take into account the people of Israel, their experiences, their values, hopes, and anxieties.”

Eyal Podolsky, president of the Jewish campus group Hillel Ottawa, explained his own opposition to BDS by sharing anecdotes of antisemitism on campus, which he linked to the campaign.

“I personally have had two experiences in the past two weeks with directed antisemitism,” he said. “I was walking by two gentleman, and one of them sees me — I wear a kippah all the time, so I’m obviously visibly Jewish — and one of them goes, ‘Oh great, the last thing I needed to see right now, a [expletive] yehudi [Jew].’”

He also recounted the experience of a Jewish student named Dalia, who said that after peers recently inquired about the origins of her name, and she indicated that it was Jewish, she was asked, “Did you steal that name from the Palestinians like you stole their land?”

“We’re talking about a movement that breeds hate,” Podolsky said. “With my kippah, I am a visible minority, people know I am Jewish, and I don’t feel comfortable walking on a campus where people feel comfortable saying things like that.”