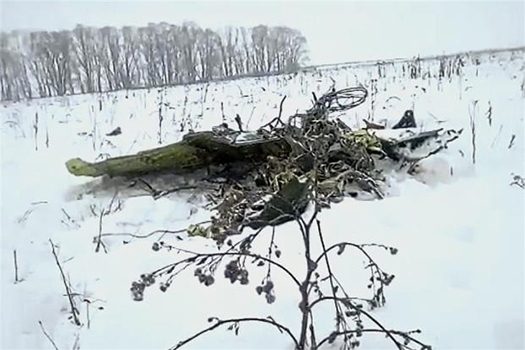 Remnants of the Saratov Airlines Antonov An-148 jet, which crashed shortly after taking off from an airport 50-miles outside of Moscow, Russia. All 71 people on board were killed.

A Saratov Airlines jetliner crash in the area of the village of Argunovo, 50 miles outside Moscow, claimed the lives of all 71 people on board. A mother and daughters last minute ticket change to attended an extra day of a Chabad conference saved their lives.

Today, Monday, a series of nine seminars on Judaism came to a close in nine different regions throughout Russia, including Birobijan in the far east of Russia. Each regional seminar had participants from neighboring cities.

The seminars were organized by “YaHaD”, the umbrella organization that helps thousands of Jewish youth throughout Russia. This round of seminars included hundreds of participants and brought in the best Russian speaking lecturers from all over the world. The founder of “YaHaD”, Chief Rabbi of Russia, Rabbi Berel Lazar, participated personally in the seminars that took place in Moscow and in Siberia.

Mrs. Talya Samanina and her adolescent daughter Malka, flew especially to Moscow from their city of Orsk, in order to participate in the seminar that took place at the Machon ChaMeSh Institute. They arrived with Saratov Airlines and were scheduled to return to their city of Orsk yesterday, Sunday, on the only flight for that day.

Rabbi Menachem Mendel Wilansky, who heads “YaHaD”, asked them to postpone their tickets by one day in order to stay until the end of the seminar, which will also include a tour of the Jewish Tolerance Museum in the Marina Roscha neighborhood. The mother and daughter agreed, and new tickets were immediately purchased for them. A few hours later they heard the news, and understood that this decision  had saved their lives. The flight that they had originally been scheduled to fly with crashed a few minutes after takeoff from the Domodedovo airport of Moscow, and all of its 71 passengers were killed.

Even before the names of the victims were published, a command room was opened at the Shaarey Tzedek Jewish Charity Center in central Moscow to clarify the condition and names of the passengers, as part of the regular contact with needy families and the adult Jewish population in Moscow.

The rabbi of Saratov and Chabad Shliach Rabbi Yaakov Kubitchek immediately appealed to the management of Saratov Airlines to track down the names of the victims and to help their families.