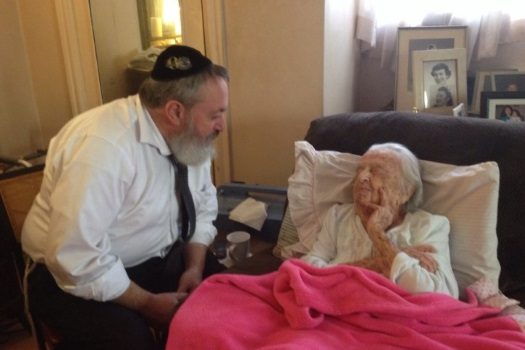 Rabbi Mendel Fogelman of Chabad of Central Massachusetts at the home of Mrs. Michelson in 2015.

The oldest American person has died at her Massachusetts home at age 113. Goldie Michelson was a month short of her 114th birthday.

Michelson was born to Jewish parents in Elizabethgrad, Russia, in 1902 and moved to the United States when she was a child. She lived in Worcester, 50 miles west of Boston.

Chabad Shliach of Central Massachusetts, Rabbi Mendel Fogelman, told VIN News, that he met Mrs. Michelson the first time in her living room at the age of 108, and was amazed at her clarity and sharpness.

“We began delivering fresh challah on Fridays to the Michelson’s home.  A couple of years ago I missed a few Friday’s,  and I received a phone call from one of the caretakers inquiring on behalf of Goldie, ‘Where is the challah?’”

“At the funeral I was happy to hear from the family that our visits from Chabad meant so much to Goldie. It was a privilege to be welcomed into the home of the wise and regal Mrs. Michelson,” Rabbi Fogelman said.