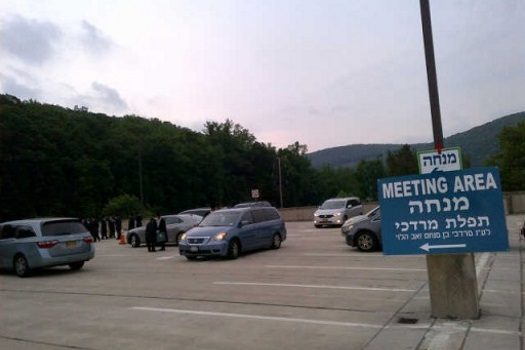 In what has become an annual rite of summer, the Sloatsburg Mincha Area will be reopening tomorrow night, giving Thursday night Catskills-bound travelers a convenient location to catch a minyan or grab a kosher snack.

The Mincha Area, located between exits 15A and 16 on the northbound New York State Thruway, was officially founded to serve Orthodox Jewish travelers in 1993, but the origins for what is likely the only official highway Mincha spot anywhere in the world actually began four years earlier.

According to the New York Times (http://goo.gl/3FfSrA) it was the summer of 1989 when an official at the Thruway Authority sent a memo to the highway police describing how large groups of cars would pull over onto the shoulder of the highway at the Harriman toll plaza, with men getting out of their cars and waving down passing vehicles in order to put together a minyan.  While prayers went on, children would play on the side of the road and traffic slowed down, creating a scene that James Atkins, a spokesman for the New York State Police described as “a situation meant for disaster.”

Both police and Thruway officials began working with then-governor Mario Cuomo, creating informal prayer areas that would be removed from the flow of traffic. The location of the prayer spot would change over the next few years until renovations were completed at the Sloatsburg rest stop, which became the Mincha Area’s official location in 1993.

Rabbi Edgar Gluck, co-founder of Hatzolah who served with the NYSP as a special assistant for community affairs, worked hand in hand with state officials on the project.  Referencing the sign at the Sloatsburg rest stop that said “Service Area,” Rabbi Gluck observed, “We take it literally.  We hold services.”

The spot was renamed the Tefilas Mordche Mincha Area in 2010 in memory of police chaplain and Kiryas Joel residence Mordche Friedman, who would spend Thursday evenings supervising the location, ensuring that everything proceeded smoothly.

As in previous years, the Mincha Area will be open from 5 to 11 PM each Thursday night.  Those who make use of the facility are reminded to park only on the upper level, not to engage in solicitations or collections of any kind and to obey all traffic laws.

Kosher food will be available in the upper level vending machine and the public is reminded to supervise their children at all times and to make sure never to leave children unattended in their vehicles.