« New Shluchim to Paris
From Days Gone By: Crown Heights in the ‘30s » 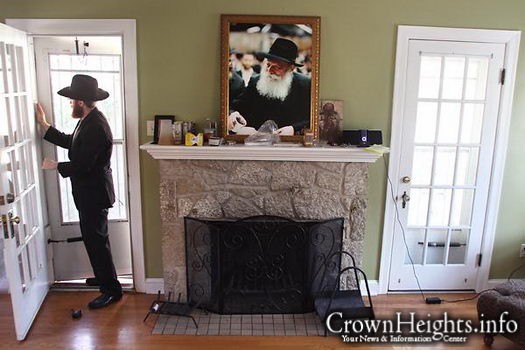 File photo: Rabbi Avremi Lapine affixes a mezuzah to a side door of his home in Columbia, MO.

University of Missouri-Columbia police are investigating a case of anti-Semitic vandalism after someone wrote “Hitler Rules” on a notification board inside Gateway Hall sometime Monday night or Tuesday morning. Shliach on campus Rabbi Avraham Lapine says the repeated incidents are concerning.

From the St. Louis Post-Dispatch:

The incident marks the fourth time university officials have investigated anti-Semitic vandalism in the past year at a school that has become a national symbol for strained race relations.

“This type of vandalism attacks everyone,” interim Chancellor Hank Foley said. “Our core values — including that of respect — must become more than words on paper or a banner. They are the foundation of who we desire to be as a campus community and the way we all need to conduct ourselves.”

“It’s not that each one is so serious by itself; it’s serious because it keeps happening,” Lapine said. “It raises a red flag.”

Click here to continue reading at the St. Louis Post-Dispatch.

« New Shluchim to Paris
From Days Gone By: Crown Heights in the ‘30s »