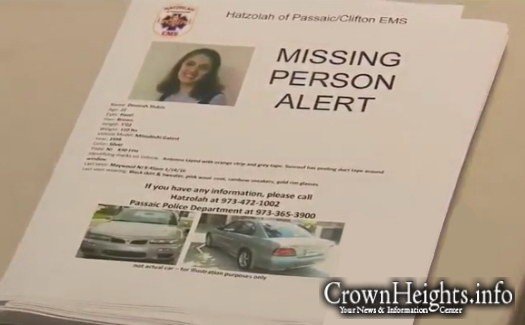 A 22-year-old Jewish woman from Passaic, NJ, who has been missing for two days has been found dead in her car, r”l, submerged in the Passaic river.

22-year-old Devorah Stubin last spoke to her parents on Thursday night after being pulled over by police for a traffic stop.  Miss Stubin, who suffers from Partial Seizure Disorder, did not have her medication with her at the time of disappearance, and reportedly sounded lost when she called home.

New Jersey State Police chaplain Rabbi Abe Friedman confirmed that the vehicle found in the river was the vehicle Miss Stubin had been driving at the time of her disappearance.

“The car is a match and the license plates match,” Rabbi Friedman told VIN News.

Rescue teams are on hand to extricate the car from the river and Rabbi Friedman confirmed that there is a body in the car, which is expected to be identified as the missing young woman.

Close to 1,000 volunteers joined in the search for Miss Stubin over the weekend, including members of law enforcement, local elected officials and Hatzolah volunteers from Passaic, Teaneck and Brooklyn.