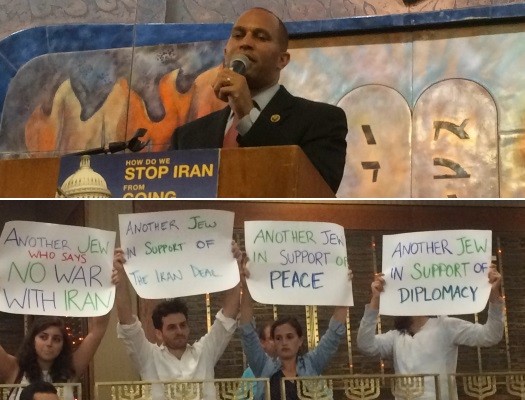 Addressing some 500 residents at a district town hall meeting in Brooklyn Tuesday evening, Jeffries said that Senator Schumer’s opposition to the deal has been very “valuable” to this thinking process as he continues to deliberate his vote on the proposed resolution to disapprove the international accord.

“Chuck Schumer is one of the more widely respected members of the Senate, and his opinion is very valuable,” Jeffries remarked. “I haven’t gotten a chance to talk directly with him, yet – subsequent to him having declared his position. And it’s needless to say that before arriving to a conclusion I will be speaking to the senior Senator, because his opinion is something that I value greatly.”

The event, described as a “town hall meeting and listening session” with Rep. Jeffries, at the Flatbush Park Jewish Center in Brooklyn, was hosted by AIPAC and co-sponsored by Agudath Israel of America, the Orthodox Union, Flatbush Jewish Community Coalition (FJCC), JCCs of Marine Park and Canarsie, the Crown Heights Jewish Community Council and Russian American Jewish Experience (RAJE).

Congresswoman Yvette Clarke, representing the 3rd largest Jewish district in the country and is in the undecided column, attended the event. She was spotted taking notes on an A4 pad.

After introducing two representatives from both sides of the debate – Dr. Jim Walsh, an expert in international security and a professor at MIT, and Omri Ceren from The Israel Project – the Brooklyn congressman shared his concerns and questions that he had come across while reviewing the deal. “The most significant question that I’m grappling with is, have we gotten the best possible agreement under the circumstances,” he said. “This is a flawed deal.. and we have to evaluate if a flawed deal is the best deal we could get.”

Regarding the inspections regime, Jeffries said, “The big unanswered question that we are grappling is what happens on the undeclared side, where there is an attempt to essentially violate the agreement. And in that context, the big question is, is there an appropriate way to sanction Iran, short of snapping back the entire financial sanctions that are in place. And to tell you the truth, no ideas in that regard have necessarily been presented by the administration, and the administration is going to have to bear the burden of of demonstrating, to me at least, the notion of what it does with a so-called minor violation that may not justify a full snapback.”

He further rejected the administration’s argument that the sanctions regime that has brought Iran to the table will collapse if Congress rejects the deal, and that the alternative is war. “I want to be in a situation where I can say the options are not between this agreement and war,” Jeffries implored.

The event was mostly calm and peaceful, although some people released some anger, grumbling and yelling, while Walsh defended the deal. At some point of the event, several Jewish supporters of the deal stood up and held up signs that read, “Another Jew who says no sad with Iran” and “another Jew in support of the Iran deal.” The crowd, mostly opposed to the deal, responded angrily, as some attempted to rip down the hand-written posters, before the group was escorted out by security.