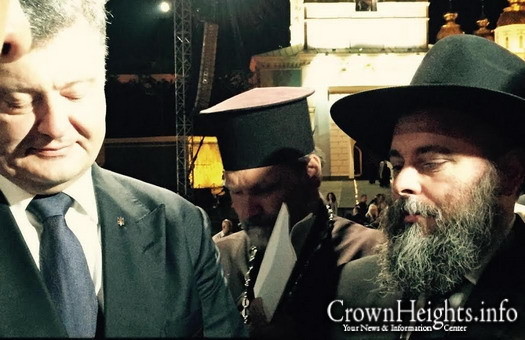 A unique encounter between various Ukrainian religious leaders occurred on Tuesday in Kiev. The president of Ukraine, Petro Poroshenko, and Rabbi Yonatan Markovitch, Kiev’s Chief Rabbi and Chabad emissary, were among the participants. During the encounter, a personal conversation took place between the two regarding the anti-Semitism in the Ukraine.

Rabbi Markovitch who has been serving as a rabbi in the Jewish community of Kiev for 15 years and who also has a long-standing acquaintance with the president, had asked Poroshenko to take action against the rising anti-Semitism in the country. The president in response took upon himself that the Ukrainian government will vouch and protect Jews from any harm as much as need. He also added that “in Ukraine, we won’t tolerate any kind of racism, whether it is targets Jews or any other minority in Ukraine.”

The background to the conversation is the strengthening of the far-right Ukrainian party of “Right Sector.” The party uses national-racist rhetoric in the spirit of classical 18th and 19th century anti-Semitism.

The movement, which openly identifies with Hitler’s ideology, swept in a short period of time since it was established in November 2013 tens of thousands of members. In part of the parades held by its people in the streets of Kiev, swastika flags and other Nazi symbols were seen.

A testimony to its up-turning popularity of this new movement was seen in the 2014 elections, where Dmytro Yarosh was chosen as Member of Parliament on behalf of the “Right Sector.” Since he was elected, he insisted on expressing his fascist and racist stances over the parliament podium in countless occasions, and this April he was appointed consultant to the Ukrainian army’s chief of staff.