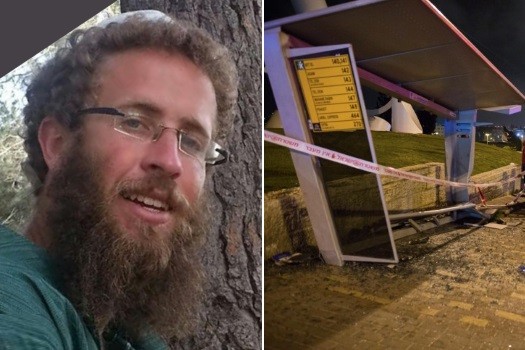 The Shin Bet (Israel Security Agency) said it is taking part in an investigation into Wednesday night’s deadly incident in which a car driven by a Palestinian east Jerusalem resident struck two Israelis waiting for a bus in the capital’s French Hill area.

The two civilians hit by the car were seriously injured, and one man died of his injuries in hospital on Thursday morning. The Shin Bet said the driver, 37, is married without children, and is a resident of the new Anatana neighborhood. He has no record of prior arrests.

“He will be taken for Shin Bet questioning after hospital checks are complete at Hadassah Ein Kerem hospital,” the agency said. “At this stage, we are investigating all directions, including the possibility that this is an act of deliberate terrorism.”

Sherki is the son of Rabbi Uri Sherki the head of the Israeli Department at Machon Meir.

Jerusalem has seen a string of car ramming attacks over the past year. Last month, five people were injured in a car ramming terror attack in the capital.  In November, an Arab man from Shuafat drove his car into 13 people at the Shimon Hatzadik light-rail stop, killing Border Police officer Jidan Assad.

In that incident, after crashing his vehicle, the suspect exited the car wielding a crow bar to attack more pedestrians before being shot dead.

In another incident last October, a 22-year-old female Ecuadorian national died in Jerusalem in a terrorist attack that also took the life of three-month- old Chaya Zissel Braun and injured seven others.