« Here’s My Story: ‘Go Ahead with the Procedure’
Florida Teens Pack, Distribute 2,000 Boxes of Matzah » 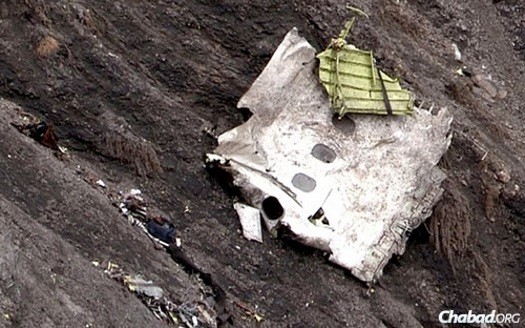 Debris from the crash site was scattered over a wide area, with no sign of survivors or remains.

As soon as he heard that a passenger plane traveling between Barcelona and Düsseldorf, Germany, had crashed into a remote area in the French Alps, Rabbi Emanuel Taubenblatt of Beth Habad Or Menahem in Marseille, France, knew he had to do something.

“As shluchim [Chabad emissaries] of the Rebbe [Rabbi Menachem M. Schneerson, of righteous memory] in the area, it is our duty to help in any way we can,” he said this evening over the phone.

Among the 150 passengers and crew on the Germanwings aircraft were an estimated 70 German nationals and at least 50 Spaniards, along with a number of other nationalities, including an Israeli, Eyal Baum, who had lived in Barcelona. There were no survivors.

Together with fellow Chabad emissary in Marseille Eliyahou Attia, Taubenblatt traveled to the scene of the crash. “There were hundreds of beds set up for the families of the victims,” he reported, “but they were empty.”

In accordance with Jewish tradition, which places a premium on bringing the remains of Jewish people to a proper burial, the men set out to see if they could be of any assistance.

While access to the actual crash site—which can be reached only by helicopter—is highly restricted, the two were able to speak to a number of officials and rescue workers.

“We understand that it is very unlikely for there to be any remains at this point,” said the rabbi grimly. “The searchers told us that they have never seen a case of such total decimation. From the entire airplane, they found little more than part of a window. They recovered a star from a pilot’s uniform and other small personal effects, but that was it.”

They also attended a memorial service, as representatives of the Jewish people, where they lit a candle in honor of those who died.

“Who can know why such a terrible thing happened?” he reflected. “One meaningful thing is that everyone came together, from all over the world, from all streams, to try to help in any way possible.”

« Here’s My Story: ‘Go Ahead with the Procedure’
Florida Teens Pack, Distribute 2,000 Boxes of Matzah »