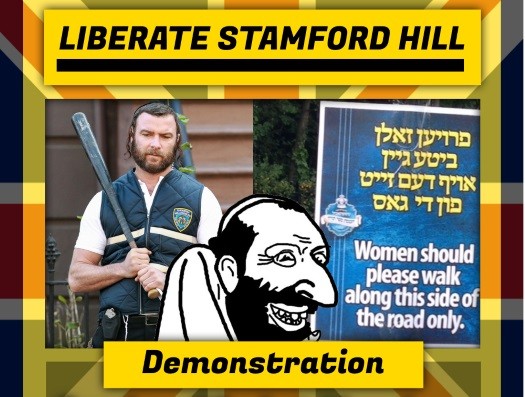 A poster put up by the anti-Semitic group advertising the rally.

A British neo-nazi group is planning a rally against the “Jewification of Great Britain” in one of London’s largest Jewish communities.

The group, Liberate Stamford Hill, veiled its planned March 22 protest as merely a protest against the Shomrim, a voluntary neighborhood watch program in the Stamford Hill neighborhood, which protects the community’s high concentration of Jews.

Though posts at the top of the group’s Facebook page removed outwardly anti-Semitic comments, most likely for the sake of evading the site’s censor controls, a look further down has posts that clearly state their anti-Semitic intent.

One post on Twitter shows a cartoon man with a big nose and yarmulke. The text reads “Jewification: Where Jewish culture occupies White countries, rendering them unrecognizable. #LiberateStamfordHill.”

Another picture shows a re-rendering of the poster from the movie Jaws, with an evil-looking religious Jewish man replacing the shark.