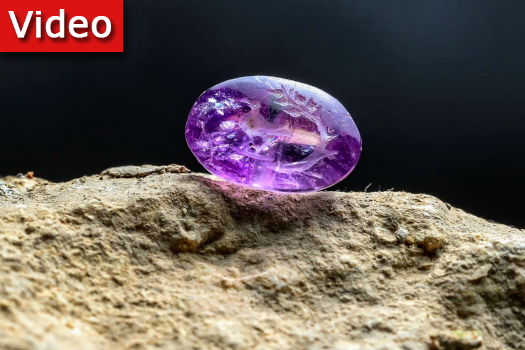 Inscribed on the 2000-year-old amethyst seal, which was worn as a ring, there appears a bird and next to it a branch that apparently depicts the famous plant. In ancient times, this expensive plant went by multiple names including biblical persimmon, bosem or balsam, and even the Balm of Gilead. This amethyst seal was discovered at the Foundation Stones of the Western Wall, north of the CityofDavid.

This may be the first depiction discovered in the entire world with an engraving of the famous plant.

This biblical persimmon plant, which is not at all related to the orange persimmon that we are familiar with today, is known from biblical and historical sources and was used during the Second Temple Period as one of the more expensive ingredients for producing the Temple incense, perfume, in addition to medicines and ointments.

According to the historian Josephus, Mark Antony gifted valuable persimmon orchards that formerly belonged to King Herod, to his Cleopatra.

Some commentators also identify the persimmon in the list of gifts given by the Queen of Sheba to King Solomon.

According to Prof. Amorai Stark, “The dove is also a positive motif in the Hellenistic, Roman, and Jewish world. It symbolizes wealth, happiness, goodness, and success.”

She notes that the engraving on the seal attests to the identity of the person who wore the ring.

“If it is indeed the famous and expensive biblical persimmon, then it is likely that the seal owner was a Jew with means, since the production and trade that took place around the persimmon plant was tightly controlled at the time by Jews living in the Dead Sea basin, where the fruit was grown.

I guess the owner of the seal was a man who owned a persimmon orchard, and when he came to the craftsman who made the ring for him, it is possible he may have brought a branch of persimmon so that the craftsman knew what to carve on the stone.”

🚨#ICYMI NEW DISCOVERY🚨 Listen to #archeologist Eli Shukron discover this beautiful gem and the secrets it holds of the biblical persimmon that used to be the famous incense for the Temple.💎