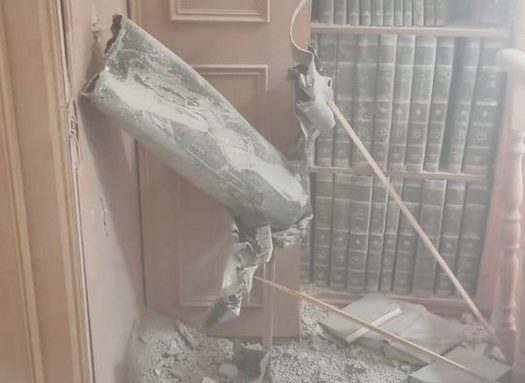 With the ongoing conflict stretching into its seventh day, CrownHeights.info provides an overview and live update feed of the days highlights.

The conflict hit a macabre milestone today as Hamas crossed 3,000 rockets fired at Israel in total throughout the conflict.

Under nearly constant rocket barrages aimed at central Israel, most of the country’s under fire citizens were forced to run for cover overnight.

Multiple rockets made it through the Iron Dome defensive batteries, with almost all landing in open areas. One impacted in the city of Ashdod, scoring a direct hit on a Shul, and landing next to a bookcase of Sefarim. No injuries were reported.

Inside Gaza, the Israeli military has continued its narrow targets of bombardment, taking out the homes of Hamas leaders, rocket caches and underground tunnels.

An almost Hollywood like video circulating from inside Gaza shows a road pockmarked with round craters where Israel allegedly dropped 15 bunker busting bombs in a perfect row, destroying the tunnel under it.

The Israeli Navy made the announcement today that it has completed destroying all the targets in it’s “bank”, completely destroying Hamas’s Naval capabilities.

Updated reports from Thursday’s surprise attack on Hamas’s underground “Metro” shows a growing number of potential militant casualties, with the number of dead as high as 400.

The Israeli cabinet met overnight, and disregarded any attempt at a ceasefire, despite some growing calls to allow Gazans to dig through the rubble to bury their dead.

CrownHeights.info will update this article throughout the day as information becomes available.

Update 2:23pm: As of 19:00, since the beginning of Op.”Guardian of the Walls”, approximately 3,100 rockets have been fired from Gaza at Israeli territory, of which approximately 450 failed launches fell in Gaza. The Iron Dome Air Defense System has intercepted approximately 1210 rockets.

Update 10:17am: A ramming attack in Jerusalem has injured six, including Border Patrol Officers. The attackers were “Neutralized”.

Update 10:08am: Hamas has succeeded in producing autonomous, remotely operated, GPS-guided, submarines armed with 50 kg of explosives, according to the IDF. They were designed to explode on the Tamar gas rig or on naval ships. Most were destroyed this week by the IDF, very few still exist.

Update 10:07am: Israel has shut down the Tamar gas rig for fear of being hit by a rocket. Hamas has tried to launch rockets at the rig, which is protected by an Iron Dome Battery.