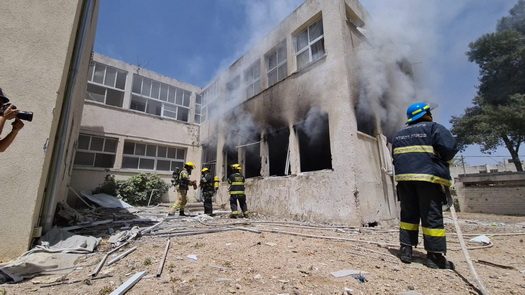 Rocket barrages from Gaza continued to rain down on southern Israel overnight, scoring some direct hits and injuring over 40 people.

Residents of Sderot and Ashdod have moved into their bomb shelters as the over one hundred rockets rain down each hour.

Israel has retaliated with precision strikes, attacking military targets across the Gaza strip.

In a single precision strike on an apartment building, two PIJ commanders were eliminated.

CrownHeights.info will be updating this article throughout the day with the most up to date information.

Update 5:22pm: Army Radio says reported “shooting attack” earlier today in northern West Bank was a mistake. The PA security force officers shot were not armed as initially thought and IDF soldiers apparently misjudged the situation. One of the officers was killed, the other seriously injured.

Update 5:00pm: Border Police units currently serving in the West Bank, are to be transferred to the central city of Lod, after violent rioting and clashes between Arabs and Jews in the city.

Updated 4:42pm: According to Channel 12, Jewish families are being evacuated from Lod by police for fear that their lives will be in danger from Arab mobs who are running rampant all over the city and burning cars and synagogues.

Update 3:54pm: IDF CoS Kohavi says over 500 sites in Gaza struck so far

Update 3:53pm: Palestinian reports of 2 dead in an IDF strike in Gaza, as rocket attacks resume toward border communities

Update 3:29pm: The Trans-Israel pipeline in Ashkelon was damaged in a Gaza rocket strike earlier, its currently up in flames.

Update 3:09pm: 7 militants are reported dead in a tunnel attack by the Israeli Air Force.

Statement by Donald J. Trump, 45th President of the United States of America

When I was in office we were known as the Peace Presidency, because Israel’s adversaries knew that the United States stood strongly with Israel and there would be swift retribution if Israel was attacked. Under Biden, the world is getting more violent and more unstable because Biden’s weakness and lack of support for Israel is leading to new attacks on our allies. America must always stand with Israel and make clear that the Palestinians must end the violence, terror, and rocket attacks, and make clear that the U.S. will always strongly support Israel’s right to defend itself. Unbelievably, Democrats also continue to stand by crazed anti-American Rep. Ilhan Omar, and others, who savagely attack Israel while they are under terrorist assault.

Update 2:42pm: 50 tall buildings in Gaza have been informed of their upcoming demolition.

Update 2:37pm: Multiple injuries in a rocket impact in Giv’atayim.

Update 2:16pm: A rocket reportedly hit a bus in the city of Holon. Reports of CPR in progress.. 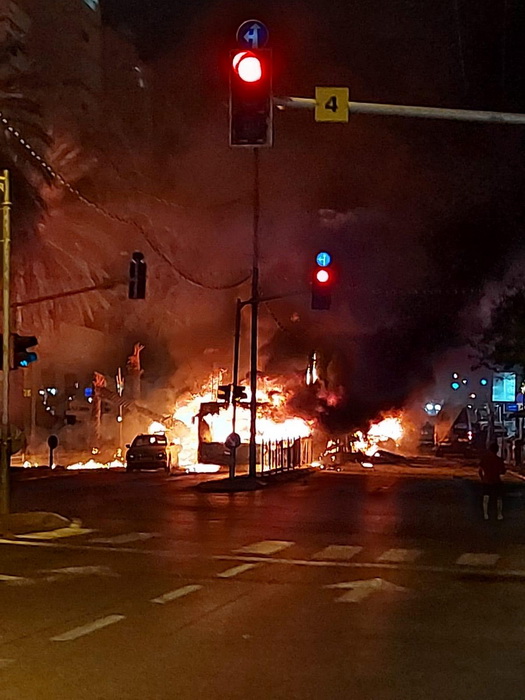 Updated 2:15pm: Flights suspended at Israel’s Ben Gurion Airport as Hamas fires a barrage of rockets towards central Israel. Reports of a rocket that hit a home in the city of Holon.

Update 1:58pm: Close to 250 red alerts in last 5 minutes. 130 missiles according to Hamas at Tel Aviv, dozens shot down. 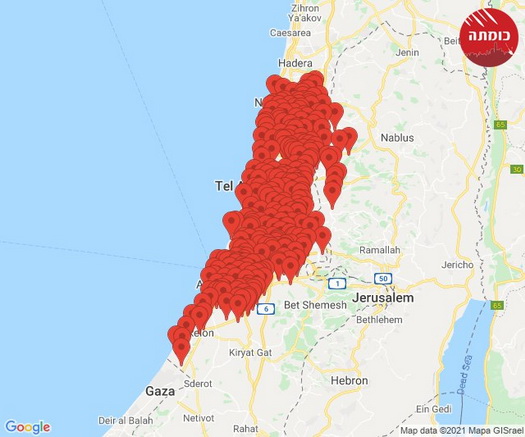 Updated 12:39pm: IDF says some 480 rockets identified from Gaza, and some 150 failed launches. They say the Iron Dome intercepted some 200 rockets.

Update 12:16pm: IDF Initial report – A report was received regarding an attempted drive-by shooting at Tapuah Junction, South of Nablus. Two assailants were neutralized at the scene. No IDF injuries were reported. More details to follow.

Updated 12:01pm: Israeli military announces it has killed the commander of the Hamas antitank force in Gaza. The senior terrorist had been involved in multiple missile attacks targeting Israelis.

Updated 12:00pm: An Iron Dome malfunction during the barrage on Ashkelon this afternoon let rockets get through, causing multiple impacts in the city.

Update 11:02am: Hamas terrorist and armed wing senior official Iyad Shreir has been assassinated by the IDF in the Sheikh Radwan neighborhood of Gaza city.

Update 10:42am: Hamas-run Health Ministry in Gaza says 28 killed, including 10 minors, and 152 wounded from IDF strikes so far.

Update 10:20am:  Some 630 rockets fired from Gaza since yesterday, with only 480 crossing into Israeli territory. Iron Dome has intercepted 90% of rockets heading for populated areas.

Update 10:07pm: The IDF just announced in Arabic to all Gazan’s if you live next to any type of weapons storage etc. Leave immediately we are starting a large round of attacks that will take a while.

Update 9:35am: Multiple interceptions over Ashkelon moments ago.

Update 9:08am: Some 500 rockets fired from Gaza since yesterday.

Update 8:57am: 2 dead and 74 injuries from Gaza rocket attacks so far. The two deaths occurred from a direct hit on residential buildings in Ashdod.