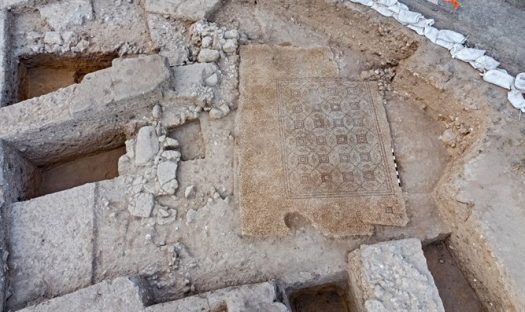 An impressive 1,600-year-old mosaic found during archaeological excavations in Yavne is to be placed on public display at the city’s cultural center, in a joint initiative launched by Yavne municipality, the Israel Antiquities Authority and the Israel Land Authority.

In recent years, the Israel Antiquities Authority has been conducting large-scale archaeological excavations to the southeast of Tel Yavne, as part of the Israel Land Authority’s city development program. The excavations, directed by Dr. Elie Haddad, Liat Nadav-Ziv and Dr. Jon Seligman, unearthed an extensive industrial zone that was in operation for several centuries.

According to the archaeologists, this is the first time that such a pavement has been uncovered in Yavne and its preservation is excellent. In their opinion, “The pavement may have been part of a splendid residential building in a wealthy neighborhood adjacent to the industrial zone.”