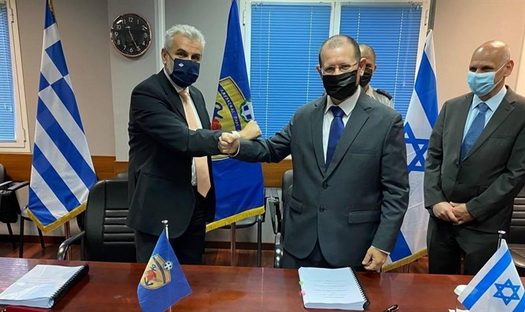 On Friday, Head of the Directorate for International Defense Cooperation (SIBAT), in the Israel Ministry of Defense, Brig. Gen. (Res.), Yair Kulas signed the biggest defense agreement to date between the State of Israel and Greece. As part of the agreement, the Israel Ministry of Defense and Elbit Systems will lead the establishment of an International Flight Training Center for the Hellenic Air Force. Modeled after the Israel Air Force (IAF) flight academy, the Greek International Flight Training Center will be equipped with 10 M-346 training aircraft produced by Italian company, Leonardo.

The G-to-G agreement amounts to around NIS 5.5 billion and will span over 22 years. Within the framework of the agreement, Elbit Systems will provide kits to upgrade and operate the Hellenic Air Force’s T-6 aircraft. Elbit will also provide training, simulators and logistical support. In the future, the parties will also consider areas of cooperation between the Israeli flight academy and Hellenic Airforce Academy.

Defense Minister, Benny Gantz: “This cooperation agreement rests on the excellence of Israel’s defense industry and the strong relations between the defense establishments of Greece and Israel. I thank the Greek Minister of Defense, Nikolaos Panagiotopoulos for promoting the agreement, which we had discussed at the last trilateral meeting held in Cyprus. I am certain that [this program] will upgrade the capabilities and strengthen the economies of Israel and Greece and thus the partnership between our two countries will deepen on the defense, economic and political levels.”