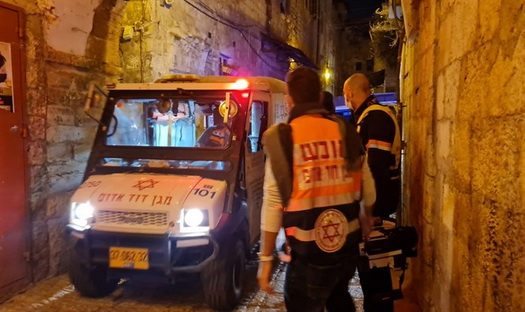 A police officer was wounded in a suspected terrorist attack in Jerusalem Monday evening.

The attack was committed near the Lions Gate of the Old City of Jerusalem, where an armed Arab opened fire with a machine gun at police.

One policeman was lightly wounded while attempting to evade gunfire.

Police forces at the scene returned fire and eliminated the terrorist.

The police stated that “a report was received about a suspect who came to the Lion’s Gate and attempted to fire [on officers]. The suspect was neutralized.”

Magen David Adom reported that “at 7:06 PM, a report was received at MDA’s 101 hotline in the Jerusalem area about an incident near the Lions Gate in the Old City of Jerusalem. MDA medics and paramedics provide medical treatment to a man who fell while running and was lightly injured, and the attacker was neutralized.”