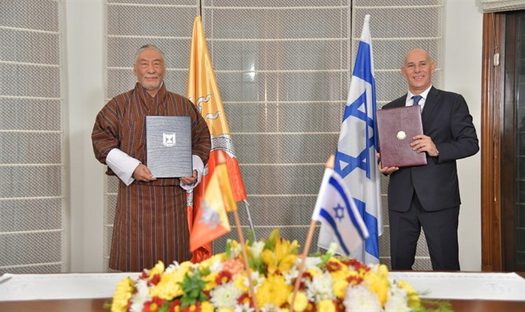 The Kingdom of Bhutan and Israel this evening signed a full diplomatic relationship. The signing ceremony was held at the residence of Israeli Ambassador to India, Dr. Ron Malka. Ambassador Malka held an official exchange ceremony with his colleague, Ambassador of Bhutan in India, Major General Vetsop Namgyel.

Last weekend, Foreign Minister Ashkenazi spoke with his Bhutanese counterpart, Foreign Minister Tandy Dorji. During the conversation, it was agreed on the date of the signing as well as on the formulation of a joint work plan in the areas of water management, agriculture, health and more.

Foreign Minister Gabi Ashkenazi said: “I would like to thank the Kingdom of Bhutan and congratulate it on its decision to establish full diplomatic relations with Israel. This decision is a milestone in deepening Israel’s ties with Asia.