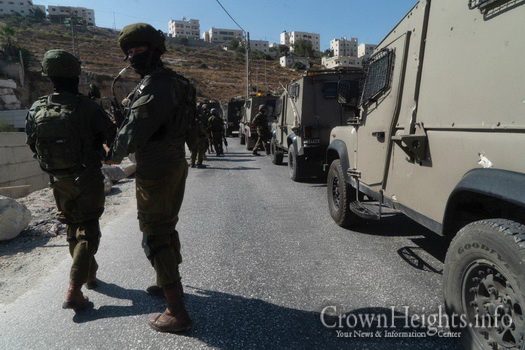 Terrorist Shot After Attempting to Stab Soldier in Hebron Area

A Palestinian Arab terrorist on Sunday morning tried to carry out a stabbing attack near the Al Fawwar refugee camp in the Hebron area this morning, according to initial reports.

The IDF spokesman also said that the terrorist had been neutralized and that our forces had suffered no casualties. The details of the incident are being investigated.

Last Wednesday, IDF soldiers killed an Arab terrorist who tried to carry out a shooting attack in the area of the Samaria Regional Brigade.

The terrorist pulled out a gun and aimed it at IDF fighters who responded immediately, opening fire on the terrorist and neutralizing him. None of the soldiers were injured.

The IDF Spokesman’s statement read: “IDF fighters who were at a military post near the southern exit from the city of Shechem returned fire at a terrorist armed with a pistol, who came in a vehicle from the direction of the city and fired at them from his vehicle. There are no casualties to our forces, the terrorist has been neutralized. “