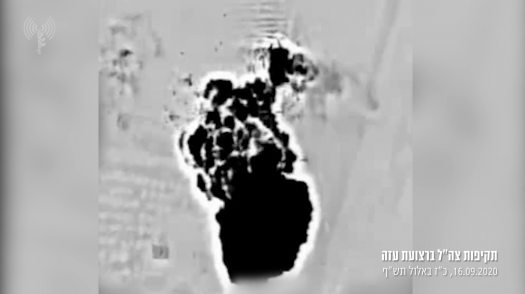 The IDF released footage Wednesday morning from a series of airstrikes carried out during the night in the Hamas-ruled Gaza Strip in response to two waves of rocket attacks from the coastal enclave on Israel.

During the Israeli airstrikes, an underground facility used by Hamas was destroyed, along with a weapons factory and explosives lab, and a Hamas training camp used to instruct terrorists in how to launch rockets.

In a statement released Wednesday, the IDF said that Israel holds Hamas accountable for all attacks emanating from the Gaza Strip.

“The terrorist group Hamas bears the responsibility for what happens in the Gaza Strip and for everything that comes out of the Strip, and it will pay the price for terrorist attacks against Israeli civilians.”

Thirteen rockets were fired from the Gaza Strip towards Israel early Wednesday morning, following an earlier wave of rocket attacks which targeted the Israeli coastal cities of Ashkelon and Ashdod.

On Tuesday, six Israelis were injured in the first wave of rocket attacks, including two who suffered serious injuries.