« The Met Museum “Islamic Amulet” Looks Suspiciously Like Tefillin
In Berdichev, They’ve Been Walking on the Grave of a Rabbi Who Couldn’t Care Less » 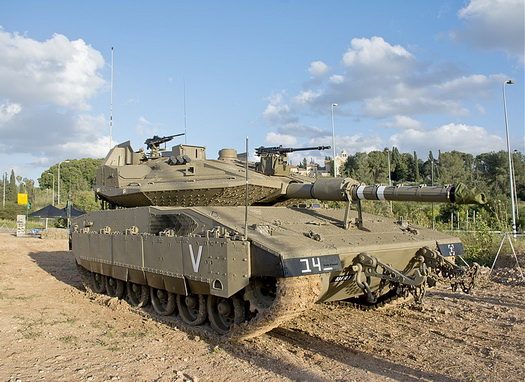 A security incident occurred in the Har Dov area near the border with Lebanon Monday afternoon, the IDF said in a statement. The details of the incident are under investigation.

Residents reported hearing gunshots, and Al Jazeera reported IDF shelling in the village of Kfarchouba in southern Lebanon. Video posted on social media purportedly showed the aftermath of the shelling of Kfarchouba.

Unconfirmed reports in the Lebanese media claimed that the Hezbollah terrorist organization fired an anti-tank missile at an IDF vehicle on the Israeli side of the border. A source in Hezbollah told Reuters that the attack was retaliation for the death of a Hezbollah fighter in an alleged Israeli airstrike on Damascus last Monday.

The IDF stated that it is still engaged in an ‘ongoing conflict’ situation at the northern border.

Prime Mister Binyamin Netanyahu and Defense Minister Benny Gantz have been updated on the incident during their respective faction meetings. Netanyahu left the Likud faction meeting early to hold a security consultation and said that a “serious incident” was in progress.

In light of the ongoing incident, local residents have been instructed to remain in their homes.

Prime Minister Netanyahu said in the Knesset Monday afternoon: “We are constantly following what is happening on our northern border. When I say ‘we’, it is me, the defense minister, the chief of staff – we are all working together.”

“Our policy is clear. We will not allow Iran to become entrenched militarily on our border with Syria. This is the policy I established ago, and we strictly adhere to it. Second, Lebanon and Hezbollah will be held responsible for any attack against us which originates from Lebanon. Third, the IDF is prepared for any scenario. We work in all arenas for Israel’s security – close to our borders and far from our borders,” Netanyahu said.

The IDF has recently increased its presence in the north in response to threats by the Hezbollah terrorist organization to retaliate for the killing of one of its fighters in an airstrike in Syria last week.

« The Met Museum “Islamic Amulet” Looks Suspiciously Like Tefillin
In Berdichev, They’ve Been Walking on the Grave of a Rabbi Who Couldn’t Care Less »