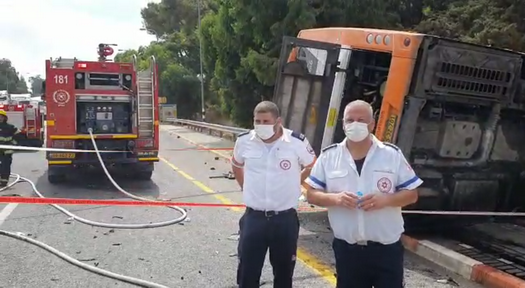 Eighteen people were injured when a bus flipped over in a traffic accident in northern Israel Tuesday morning.

The incident occurred at the Kabri Interchange on Highway 89 in the northern portion of the Western Galilee, east of Nahariya, when a bus collided with a car, causing the bus to flip over on its side.

United Hatzalah volunteer first responders were dispatched to the scene of the accident and treated the injured before they were evacuated to local hospitals.

At the scene, one person was moderately injured and 17 people suffered light injuries.

United Hatzalah volunteer EMT Osheri Eliyahu who was one of the first responders at the scene said:

“The accident involved a private car and a bus. The bus had flipped on its side. All of the victims are conscious and are either in moderate or light conditions. Due to the number of injured people, Untied Hatzalah volunteers from Nahariya, Ma’alot and Akko arrived at the scene to treat the injured. United Hatzalah ambulances transported a number of the injured to the Galilee Medical Center in Nahariya.”