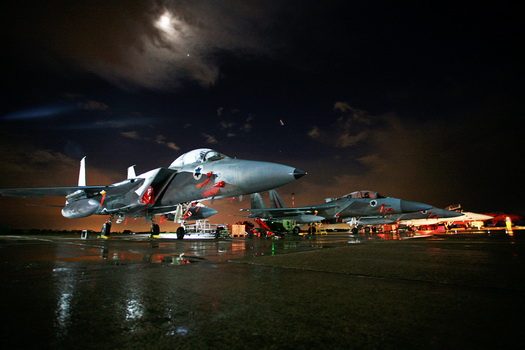 The attack was carried out in retaliation for the rocket fire from the Gaza Strip into Israeli territory earlier in the evening.

“The IDF views all terrorist activities against Israel’s territory as very serious and will continue to act as necessary against attempts to harm Israeli civilians,” the IDF Spokesperson’s Unit said. “The Hamas terror organization bears responsibility for what is happening in and out of the Gaza Strip, and it will bear the consequences for the terrorist operations against Israeli citizens.”

Warning sirens were sounded in multiple Israeli towns in the Sdot Negev Regional Council near the Gaza border. Residents reported hearing explosions in the area.

Authorities said the two rockets landed in open areas, causing no physical damage or injuries, with the third projectile intercepted and destroyed by a missile fired by Israel’s Iron Dome defense system.

Last week, terrorists in the Gaza Strip fired multiple rockets into the Mediterranean, in an attempt to intimidate Israel and stifle its plans of proceeding with the sovereignty plan, under which Israeli sovereignty would be applied to large swaths of Judea and Samaria.