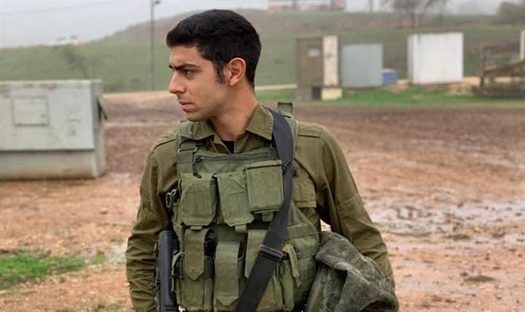 Military censors have cleared for publication the arrest, which took place several weeks ago, of Nizmi Abu Bakr, a 49-year-old Palestinian Authority resident of the town of Ya’bad, west of Jenin, in northern Samaria.

Abu Bakr is suspected of dropping a block on 21-year-old IDF soldier Amit Ben Yigal from the roof of his building in Ya’bad, during an arrest operation on the night of May 12th.

“The suspect threw the stone from the roof of his house on the night of the incident in which the soldier
was killed,” the Shin Bet said Sunday.

Ben Yigal was part of the IDF force securing the town during the pre-dawn arrest operation, and was struck in the head by a block and killed as the IDF force pulled out of the town.

Ben Yigal’s family has been informed of the arrest.

The arrest Abu Bakr was part of a joint operation by the IDF, Shin Bet internal security agency, and Israel Police.

According to a statement by an IDF spokesperon, Abu Bakr was apprehended “as part of a large-scale operational effort in the Jenin district immediately after
the incident.”

“I want to thank the IDF, the Shin Bet, and all of the security forces for capturing the despicable murderer of Amit Ben Yigal. I have given instructions for the murderer’s house to be demolished. Whoever tries to harm us – we will get our hands on them, sooner or later. And in recent years, you can see that it is sooner rather than later.”