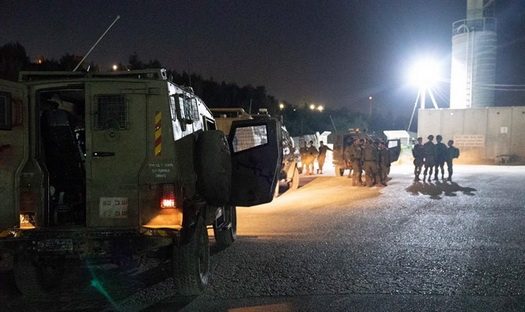 The soldiers opened fire towards three terrorists who threw an explosive device and firebombs toward an IDF checkpoint in the area.

The three terrorists were reportedly injured. The Israeli troops were not hurt.

The attempted attack comes one day after a 20-year-old soldier was injured in a terrorist ramming attack near Negohot in the Har Hevron area.

The soldier was later identified as Shadi Ibrahim from the Druze village of Sajur. He was taken for treatment at Soroka Hospital in Be’er Sheva and was admitted to the ICU.

The terrorist was shot and killed by the IDF forces.

The incident occurred while Ben Yigal’s unit was securing an arrest operation targeting a number of wanted suspects in the Palestinian Authority-controlled town of Ya’bad, west of Jenin.

During the pre-dawn arrest operation, a block was dropped on Ben Yigal, striking him in the head and fatally injuring him.

Security forces are continuing the manhunt for the terrorists behind the murder.