« Hatzalah-Thon: Ben Shapiro Has a Message About Hatzalah
Pan Kloli To End This Pandemic » 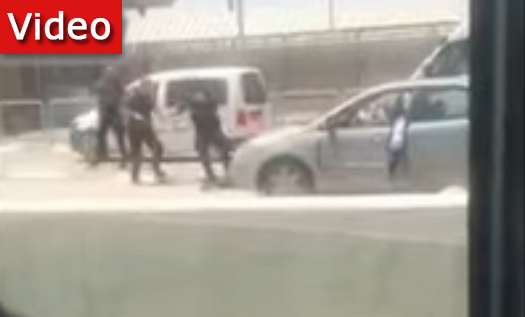 A Palestinian Arab terrorist attempted to stab Israeli security forces outside of Jerusalem Tuesday afternoon, but was shot and neutralized before carrying out the attack.

The incident occurred at the Qalandiya checkpoint north of Jerusalem Tuesday afternoon, when a terrorist armed with a knife attempted to stab an Israeli border guard.

Israeli forces at the scene opened fire, shooting and wounding the terrorist, who was subsequently placed under arrest.

The terrorist was treated at the scene before being evacuated to Shaare Zedek Medical Center in Jerusalem.

“The assailant arrived at the checkpoint, holding a sharp object in his hand, and approached one of the security personnel working at the Qalandiya checkpoint and attempted to stab him,” a police spokesperson said.

The Border Police officer “spotted [the terrorist] from a short distance and managed to open fire on him, and neutralized him. There were no injuries at the scene” among the Israeli security forces.

Earlier on Tuesday, an Israeli soldier was killed when terrorists operating in northwestern Samaria dropped a block on his head from a third-story roof in the Palestinian Arab town of Yabad.

« Hatzalah-Thon: Ben Shapiro Has a Message About Hatzalah
Pan Kloli To End This Pandemic »