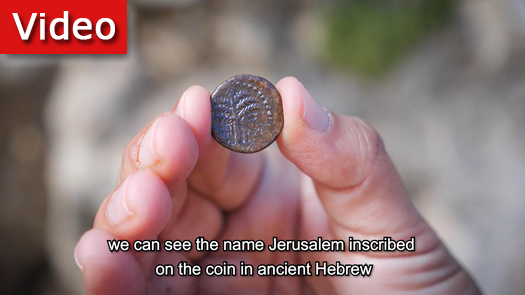 In honor of Lag B’Omer, the Israel Antiquities Authority on Monday revealed a rare bronze coin from the period of the Bar Kokhba revolt (circa 132 CE), which was discovered in archaeological excavations of the Israel Antiquities Authority in the William Davidson Archaeological Park, under the supervision of the Company for the Reconstruction and Development of the Jewish Quarter in the Old City of Jerusalem, Ltd. located between the Temple Mount and the City of David.

The excavations are conducted by the Israel Antiquities Authority and funded by the Ir David Foundation (Elad), which operates the site.

Coins from the period of the Bar Kokhba revolt, which declared the rebels’ purpose – to liberate Jerusalem from Roman occupation after the destruction of the city – are well-known in archeology. Discovering such coins helps researchers map out the revolt, which took place approximately 1,900 years ago.

It is interesting to note that the rebels minted these revolt coins on Roman regime coins with stripped or damaged faces, possibly out of defiance of the Roman occupation.

The revolt coins featured the Temple facade, trumpets, a harp/violin, as well as the inscriptions: “Redemption of Israel” and “Freedom of Israel.”

Dr. Donald Tzvi Ariel, Head of the Coin Department at the Israel Antiquities Authority, examined over 22,000 coins discovered in archaeological excavations in the area of the Old City in Jerusalem.

This examination revealed that only four of the coins are dated to the period of the Bar Kokhba revolt. This is a very small number, even more so when compared to the large number of Bar Kokhba coins that have been found outside of Jerusalem.

The recently discovered coin is the only Bar Kokhba coin found in the area on which the word “Jerusalem” appears.