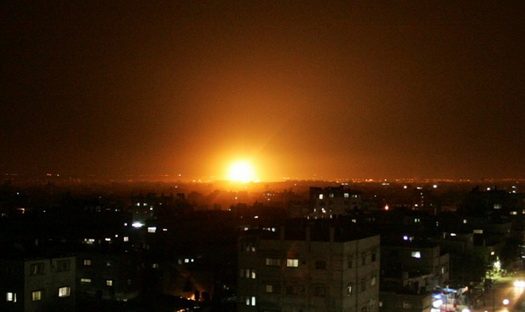 Among the targets attacked were underground infrastructures used by Hamas’ military wing, including a structure which serves as a military war room.

Attacking these targets impairs the capacity of the terrorist organization. The attack was carried out in response to the rocket fire and incendiary balloon attacks from the Gaza Strip toward Israeli territory during Shabbat.

“The IDF views any terrorist activity toward Israeli territory as very serious and is in high readiness for a variety of scenarios. The IDF will continue to act as necessary against attempts to harm Israeli civilians,” said the IDF Spokesperson’s Unit.

“The Hamas terrorist organization is responsible for everything that happens inside and outside of the Gaza Strip, and it will bear the consequences for the terrorist actions against Israeli citizens,” the IDF stressed.

Terrorists fired a barrage of rockets toward southern Israel on Friday evening. Red Color sirens were sounded on Friday evening, around 10:40 p.m., in the Eshkol Regional Council, located near the Gaza border.

The IDF Spokesperson’s Unit confirmed that one rocket was fired from Gaza towards the area.

Earlier, around 8:20 p.m., sirens were sounded in the city of Sderot and other communities near the Gaza border.

The IDF Spokesperson’s Unit confirmed that a rocket was fired from Gaza toward the area and was intercepted by the Iron Dome anti-missile system.

There were no physical injuries but minor damage was reported to homes in Sderot, likely as a result of the interceptors.

In response to the rocket and balloon attacks from the Gaza Strip, IDF aircraft attacked Hamas targets in the northern Gaza Strip overnight Friday.

On Saturday morning, balloons with an explosive device landed on the coastline of Kibbutz Zikim in the Hof Ashkelon Regional Council. IDF sappers were called to the scene.