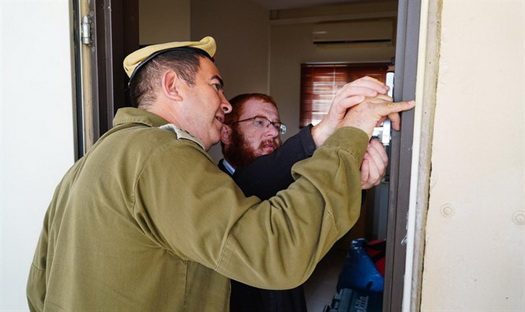 After a lengthy process, the IDF completed the task of installing mezuzahs on the doorposts of all soldiers’ living quarters, in army bases and camps around Israel.

Due to instances in which mezuzahs were missing from rooms or found to be unfit for use, the IDF Rabbinate began a six-year program, called “Mashkof” (literally, doorpost – ed.), to examine and renew all of its mezuzahs.

The IDF Rabbinate appointed its Intelligence Department to lead the project, and a professional staff was appointed, led by Sergeant Major Yossi Sternfeld in cooperation with the Halakha (Jewish law – ed.) Department.

Contributing to the project was the Or Lachayal organization, which provided both financial and practical aid, as well as the Construction and Defense Ministry’s Engineering and Construction Department.

The installation itself was conducted by the IDF Rabbinate, together with representatives from Or Lachayal.

A few months ago, IDF Chief Rabbi Eyal Karim prioritized placing mezuzahs on the doorposts of all doors in IDF soldiers’ living quarters – a number estimated at around approximately 6,000. This project was recently completed, and the IDF has asked that any soldiers who notice a room without a mezuzah ask their unit rabbi to provide one.

“Project Mashkof is an example of the excellence and professionalism which the IDF Rabbinate aims for,” Rabbi Karim said. “This project significantly addressed the demand which we have seen from all units for high-standard mezuzahs for IDF soldiers and commanders. Now, since we have completed the placement of mezuzahs in living quarters, we will continue to the next stage, which includes the other buildings and facilities.”

“We thank the Rabbinate’s Intelligence Department for leading the project. We hope and pray that IDF soldiers will merit all of the benefits and protection promised by our sages to those who fulfill this precious commandment.”