« At 100, Vet Who Fought The Nazis Lights Menorah For The First Time
“When People Speak About Someone, Or They, Should Do Something, I Am That Someone” » 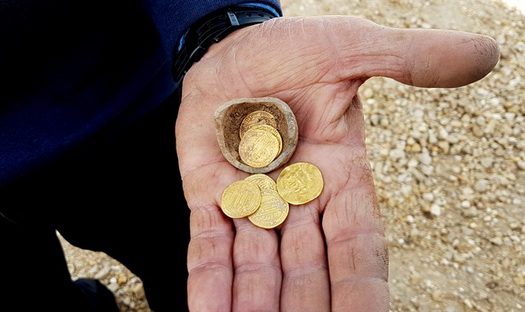 “Chanukah gelt” was found last week during archaeological excavations in Yavneh during excavations conducted by the Israel Antiquities Authority prior to the development of a new neighborhood at the behest of the Israel Lands Authority.

The archaeologists were surprised to discover a broken clay juglet containing gold coins dating to the Early Islamic period. The excavations revealed an ancient industrial area which was active for several hundred years, and the archaeologists suggest that the shiny treasure may have been a potter’s personal “piggy bank”.

“I was in the middle of cataloging a large number of artifacts we found during the excavations when all of a sudden I heard shouts of joy” said Liat Nadav-Ziv, co-director alongside Dr. Elie Haddad of the excavation on behalf of the Israel Antiquities Authority.

“I ran towards the shouting and saw Marc Molkondov, a veteran archaeologist of the Israel Antiquities Authority approaching me excitedly. We quickly followed him to the field where we were surprised at the sight of the treasure. This is without a doubt a unique and exciting find especially during the Chanukah holiday”.

Inspection of the Yavneh gold coins conducted by Dr. Robert Kool, an expert on ancient coins at the Israel Antiquities Authority, dates the coins to the early Abbasid Period (9th century CE). Among the coins, is a gold Dinar from the reign of the Caliph Haroun A-Rashid (786-809 CE), on whom the popular story “Arabian Nights” also known as “One Thousand and One Nights” was based.

“The hoard also includes coins that are rarely found in Israel” says Dr. Kool. “These are gold dinars issued by the Aghlabid dynasty that ruled in North Africa, in the region of modern Tunisia, on behalf of the Abbasid Caliphate centered in Bagdad”. “Without a doubt this is a wonderful Chanukah present for us” concluded Dr. Kool.

The large-scale excavation, carried out southeast of Tel Yavneh, revealed an unusually large amount of pottery kilns that was active at the end of the Byzantine and beginning of the Early Islamic period (7th – 9th centuries CE).

The kilns were for commercial production of store-jars, cooking pots and bowls. The gold hoard was found inside a small juglet, near the entrance to one of the kilns and according to the archaeologists could have been the potter’s personal savings.

In a different area of the site, the remains of a large industrial installation were revealed dated the Persian period (4th – 5th centuries BCE) used for the production of wine.

According to Dr. Haddad of the Israel Antiquities Authority “initial analysis of the contents of the installation revealed ancient grape pips (seeds). The size and number of vats found at the site indicated that wine was produced on a commercial scale, well beyond the local needs of Yavneh’s ancient inhabitants”.

« At 100, Vet Who Fought The Nazis Lights Menorah For The First Time
“When People Speak About Someone, Or They, Should Do Something, I Am That Someone” »