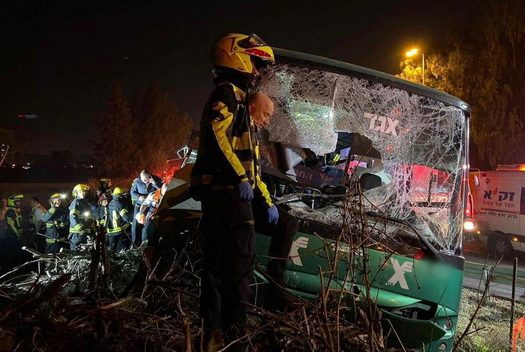 Four people were killed and 14 more injured in a bus crash Sunday evening in central Israel.

The accident occurred near Bedek Junction on Route 40, near Yehud, when a 947 line bus operated by the Egged company crashed into a bus stop.

Four of the 15 people who were injured were later declared dead, while two more, a 19-year-old woman and a 67-year-old woman, were seriously injured. Another 12 suffered light injuries.

“Unfortunately, two men and two women have been pronounced dead after their bodies were extricated from the bus by firefighters,” said United Hatzalah volunteer EMT Niv Hershko.

Emergency medical teams from MDA and United Hatzalah were dispatched to the scene to treat the injured and evacuate them to local hospitals.

Police have closed a stretch of Route 40 following the accident.

“A bus struck a station on Route 40 near Bedek Junction,” a police spokesperson said. “There are a number of injured at the scene being treated by medical teams. A police force is on the scene, and the circumstances are being investigated.”

United Hatzalah volunteer EMTs Neriah Hajbi, Lior Tabib and Raphael Elmaliach reported from the scene : “Due to the severity of the accident firefighters were working to extricate people from the bus. According to witnesses, the bus crashed into a bus stop and the cement pole next to the bus stop fell on top of the bus crushing part of it. When we arrived, we treated 12 people, some of whom were in serious and critical condition.”